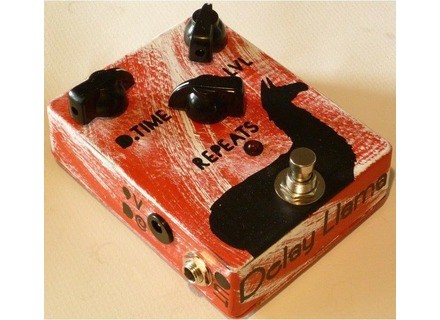 This is a hand made boutique delay pedal geared towards vintage tone and vintage delay sounds. All completely analog circuitry and analog sounds.

Therefore the features are pretty basic with just the level time and repeats.

There has been a few different models of this, limited editions with different paintjobs and features etc etc. It's kind of all over the place, but the essential sound is still the same.

Quite simple to use since it's an analog delay, you can't tap anything out you just sort of have to approximate the times and whatnot with the time knob. Not particularly useful for live within a band context i'd say but perfect for jamming and whatnot.

Sounds great. Lush, thick, warm and has a very vintage vibe. These pedals are handmade from Greece and have created a pretty decent following. Most of their pedals are sort of the creator's take on the originals with some twists and whatnot. But still using original chips to keep the same vibe and vintage tone.

The delay llama is no exception, it sounds great! I've heard and seen these used a few times at gigs and have never been disappointed with the sound.

There's really not much more I can say about this delay pedal. It sounds great, has a true vintage vibe and would suit any situation for those looking for a short-to-medium delay sound with a vintage vibe. I believe this goes up to about 600ms.

Great pedal! Truly boutique sounds! Nice paintjob! Easy to use! A little bit pricey for some! Depends on how much of a delay-boutique fanatic you are.

ENG152's review (This content has been automatically translated from French)"Shop!"

Jam Pedals Delay Llama
5
JAM DELAY LLAMA is &nbsp;a "Boutique" stompbox analog delay Made by JAM, a Greek workshop that manufactures pedals in small quantities and made good puns about their names. Each pedal is unique : there's a fairly large variation in aesthetics. Mine is a "stamps one" decorated with real Greek stamps pasted on its entire surface, giving it a nice postcard like flavor : quite charming.

Technical specs of the machine:

Let's unpack the pedal ! It comes in a small kind of recycled cardboard box (on which is written "DL Stamps" and "JAM" ) with a sheet of paper on which is the "user manual" . The high-quality paper shows that JAM does not do things lightly. There is also a visit card of the workshop, a Jam Pick ... I must specify that this pedal is theoretically accompanied with a fabric pouch. Mine was sadly lacking, "La pédale" french Musicstore is sorry since they do not know where is the pouch ... Too bad for me ... too bad for them !

There is also a "LLLAMA PLUS" from JAM which embeds a outlet for expression pedal and a "HOLD"switch ... .

When openning the stompbox there are two screws to adjust the pedal BIAS which should not &nbsp;be handled, as specified in the user manual. The delay can also be adjusted thanks to an internal TRIMPOT.

Personal Notes: In case of failure, I wonder if stamps are sufficient for a return to JAM workshop ?

Using of the Llama is quite simple: you just have to deal with three "Chicken head" &nbsp;knobs.

The second (REPEATS) allows to setup the number of repetitions. If the balance between the setting chosen for this one and the "DELAY TIME" is too large (read "if it is much higher") then the self oscillation phenomenon - characteristic of analog delays happens (it can also found on some digital delays which makes me laugh). Note that JAM DELAY LLAMA seems extremely tolerant towards self oscillation. You really have to push it to trigger this phenomenon, which is a pretty good news. I saw no problem tolerating differences between 40% and DELAY FEEDBACK, which is great.

The manual is very clear, but this &nbsp;is hardly a user manual: there is a diagram explaining the three buttons, a picture showing what not to touch and accolade by &nbsp;guitarists that are clearly better than i will ever be.

The switch is responsive and the activation discrete : this delay is really easy to live with.

Played with a Stratocaster U.S. 2012 FENDER DELUXE a Reverb, a RAT WHITEFACE VOX V846 Wah and Handwired. Never used in an effects loop.

Okay, rely on the switch!

The delay coming out to 70% on all settings is simply wonderful.

Warm, cozy, sweet to my ears but bursting with character. Notes die so beautifuly , repetitions &nbsp;are all slowly disintegrating like bells in the distance without sounding too bassy ... I could spend hours playing on her ... besides I did it . Later, other settings delivered superb slap back that magnify&nbsp;my stratocaster sound. The sound of this pedal is never intrusive! even with a heavy hand on the settings, this is still music, a very warm one, the original note can be discerned well, in a nutshell: it sounds!
repetitions are &nbsp;discreet, still less charged with highs and less accurate than the original. they are the Phantoms, memory ... ever "grimey" ... just a little colorful, kind of "LO-FI"!

When listening to their natural deformation on arpeggios, I wonder how I have been wanting a chorus on a delay! With a sound that classy, it seems useless ...the guitar character is respected, the dynamic is totally outstanding: the way this box reacts to attacks is magical. JAM people are &nbsp;killers ...

Here we are ! An analog delay with a beautiful sound &nbsp;in a sumptuous setting.


I chose this pedal after a everlasting search for the delay that could &nbsp;meet my desire for heat, musicality, dynamics.

man , we can say that I have tried a few damn pedals!

This is my favorite one : I think its only cons is the lack of battery operated power. Outside the JAM, the most significant has been the HBE MIMIC which is also a nice little killing stompbox, very close to the JAM, with a delay shorter and operation on 9 volt battery! My old Deluxe Memory Man didn't sounded so well ...

During my quest &nbsp;I heard no digital delay able to compete with these great analog pedals in terms of musicality. In fact, for my use and for me, and kept all proportions and trying not to hurt anyone ... I must say: I think (but then there it is only my opinion!) I think, I said, that digital delays still suffer a bit &nbsp;at the brutal and cruel direct comparison with an analog delay ... it is a bit like comparing a deluxe reverb emulation with a real deluxe reverb with all tubes heated like hell : Ouch, it really stings ... Even advocates of emulation with&nbsp;line 6 obligations up their pouch wince &nbsp;...

More seriously and to conclude on the Llama:

When we speak of analog delay that is in fact what we think of : a simple and nice stompbox sounding in any configuration, capable of thickening and / or make nice the sound of your guitar. This is what all the "emulations" try to imitate, and on what it will break all their teeth ... A delay is not a dumb repeater (even with algorithms made to mess with the sound !), it is never really true copy ! This is quite a bitch story between a good guitar, &nbsp;red-hot tubes stuffed amp and a good sounding delay together: it is not &nbsp;an engineer trick, it is not computer story ! it is &nbsp;the damn music ! it is Root and yes, this time, it makes our hearts pounding like hell !

Here are some photos:

The LLAMA every angle and posing next to the SUPA WAY HUGE PUSS after not having done a little bite ...