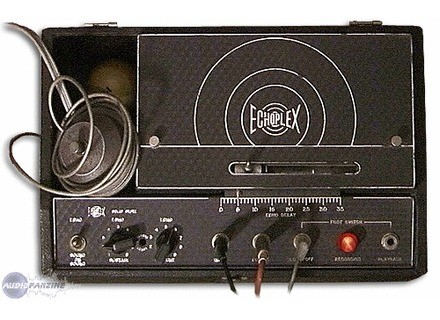 Maestro Echoplex
5
The Maestro Echoplex is an analog and vintage echo box.  This isn't your typical piece of outboard gear, but it does have 1/4 inch connections for input, output, and the foot switch.  This isn't rack mountable at all as it stays in its own box.

In terms of parameters and setting up your sounds, the Maestro Echoplex is fairly easy to get used to.  The unit has knobs for sustain and echo volume, and also has a large slider for echo delay, ranging from 0 to 35.  As you can tell it doesn't have a plethora of parameters, but it definitely has enough to get the job done in my opinion.  The manual is pretty detailed, so if you feel that you might have trouble setting this up and using it, I'd recommend consulting the manual.

I haven't used all too many delay boxes other than this one and the Roland Space Echo, but if the Space Echo is the holy grail of units like this, then I believe that the Maestro Echoplex would come in second.  While definitely not as versatile and great sounding as the Space Echo, this has a lot of cool qualities about its sound and is a great unit in its own right.  I've only had the chance to use this on a few occasions for throwing some echo a lead vocal and was very impressed with the sounds that I was able to get.  I found it to be great for both subtle slap back delay and for more echo and wetness in a delay.  It definitely has a warm and realistic tone...

Other than the one that I have used, I haven't seen any other Echoplexs around.  They can definitely be found on eBay, as there are always a lot of them up.  I would imagine that some studios have them, but this isn't a main stay by any stretch.  The price of these does vary used, but can get pretty expensive.  Unless you're looking for a true analog echo and have a large studio, it is probably more realistic to check out a more compact unit, or a plug-in, but there definitely aren't too many legit replacements for a unit like the Maestro Echoplex.

Maestro Echoplex
5
It&#39;s a tape echo and reverb that produces echoes. It is clearly seen analog age. there are several successive models: the EP1, EP2 and then sold in the 60&#39;s. Both were tube (for the second 6EU7 2 and 6C4, the first I do not know). Followed the Solid State with no lights so: the EP3 (model photo) and the EP4. Both models are the most sought EP2 and EP3. Fulltone, which markets a tape echo, also has plenty of inspiration for his EP2 Tube Tape Echo. Brand Echoplex was a huge success in the United States during his lifetime. Especially since the tape echo was used by legendary musicians like Jimmy Page with his own was amended by the famous Pete Cornish - http://www.petecornish.co.uk/jptt.html - Joe Walsh, Chet Atkins Eddie Van Halen or Tommy Bolin, to name a few. Tony Banks, the keyboard of Genesys, is also used in the album A Trick of the tail. Pouir back to the history of the box, Echoplex was en route, taken by the American Society Maestro. When? I do not know. But some models have a logo Echoplex, other Echoplex / Maestro and others, only Maestro. The story of Echoplex is then part pacifier, or is in any case blurred. Mine is from 1979 or 1980: it covers only the logo Echoplex. By 1984, then after bankruptcy it seems, the parts inventory was taken over by the main wholesaler of musical instruments US Harris-Teller toujouts that exists and which, at the time, entrusted to the care of an electronics do with the stock parts for new Echoplex, a model in series limited to lamps. Then the brand was bought by Gibson Echoplex who used to market a digital echo still listed today. Meanwhile, the inventor of the Echoplex, Mike Battle, mounted a box to produce a new tape echo, the Tubeplex which is still manufactured ( http://www.tubeplex.com/ ). Mike Battle died last month, in April 2008, at the age of 90. He was still working. The box should survive him.

For info: other brands have created excellent tape echo, whether WEM Copicat (used by the Shadows) or German Dynacord Echolette and who have done more than the late 60. Finally, include Binson, the brand most sought after and expensive pus, which still exists ( # http://www.binson.com/ / home/4519462595 ( http://www.binson.com/#/home/4519462595 ) ). Binson echo the tape is or was an important component of the sound of David Gilmour, at least in the 70&#39;s. The Echoplex tape echo is still the most coveted in the U.S. where major advantage that it can always be maintained, adjusted and repaired. Moreover, its key parts are still made (engine, transmission belt, cartridges ...). The Echoplex is still very present in American music, but not her.

No need for manual use is basic. An input, output, volume of the echo and sustain knob. Finally, moving the recording head on the rail to increase or decrease the delay. The most common use: the slapback (very short delay for the rock&#39;n roll), reverb, special effects science fiction style. These effects have a price maintenance. A tape echo has to be constantly pampered: head cleaning with isopropyl alcohol, not alcohol at 90 ° and preferably not be used for this cotton stalks, but a chamois and that leaves no lint , but avoid pressing the contacts of the heads and the roller application, he, another special product rubber (not alcohol!). And then we must also demagnetize the heads regularly (not easy to find a cheap degausser on the market) and have the band 1 / 4 inch in reserve, knowing that almost all manufacturers, or all gone. For the band, a tip: use only the band lubricated (lubricated tape in United States), all others are abrasive and destroy the heads over time. In short, you can see, the Echoplex, which weighs around 6 kg, is an effect that must be handled with such delicacy that a tube amp or a guitar honey. Do not be afraid to change the condos. Not recommended for those who do not intend to use the soldering iron. Not recommended also to all those looking for a very long delay tap tempo or effect or seeking the sound of The Edge who played him, initially on a Korg SDD-3000.

So why the notice on the Echoplex? Because its effect is unique and what makes the difference with other delays, sublime. The only way to reproduce it is to go through a tape echo. It has chosen to Fulltone is not known to market stews, far from it. Its fulldrive and Clyde wah attest to the quality of its products. For my part, I have way to compare the Echoplex: I have an Ibanez AD-100, 1980, sister of the AD-80, and a digital delay of the first Ibanez (the PDD1 - very good), a Digitech digital delay and digital Dynacord (super nice, but not enough dynamic). I also had the opportunity to test a HeadRush, the one and the Line 6 delay, which I regret to say, do not play in the same court. Only Replex (Hughes & Kettner) deserves indulgence. It works well. A big difference: the heat of the Echoplex which is unbeatable.

I am a fused analog effects. I admit it. But I avoid also get carried away at every opportunity. As proof, I am careful not to write an opinion if I have acquired an effect does not seem to deserve the singing its praises. Finally, I can say: all the effects I have, three, four tell me, are really essential: the MuTron Phazor II, Cry Baby wah Jen super (Fasel red), Colorsound Supremo (just under vital ) and the Echoplex. Plex fate of the wonderful reverb and short delay. The machine can also nice-it&#39;s less-heard a nice engine noise (another good reason to maintain it). For a preview, go to Youtube: Most demos are transplanted, microphone placed in the room, so you get the effect certainly, but also the engine. Clearly, it does not highlight the craft. For this you know that in any way, the drone passes the signal picked up by the amp. Fortunately. What happens in the amp looks like, however, that high Mr Fuller has posted, as a demo tape of his tube echo ( https://www.fulltone.com/tte.asp ). Something else. Nénmoins remains, as is the Echoplex, a residual background noise due to band technology, which means that when not playing. It can interfere with some, but not lovers of tape echo for that it adds to the charm. By the way, on his website, Mike Fuller is a whole chapter to recommend against buying a Echoplex and turn to his TTE course that costs to date, $ 1,200, three or four times the price of one good plex to United States. So I see here the proof of the success still blown by the Echoplex with American musicians. Finally, the TTE is very good too.
Going back to my plex, it is rather special. It is a mix of EP2 and EP3, model custom made in very small quantities by Mike Battle itself. In fact it is an EP-3 tube, which is exceptional. Finally, it is one of the last produced by Echoplex. You can, if you like, see the website of the Regis Coyne American guitarist who has posted under the heading My Gear / Echoplex / An EP-3 with tubes!. This site is also the main resource center Echoplex United States. I recommend it (and it makes the pub): http://www.regiscoyne.com/echoplex/Tube_EP-3/ You can also see photos on my site http://www.bruynooghe.fr


19 of 19 people found this review helpful

See all 61 photos of Maestro Echoplex »