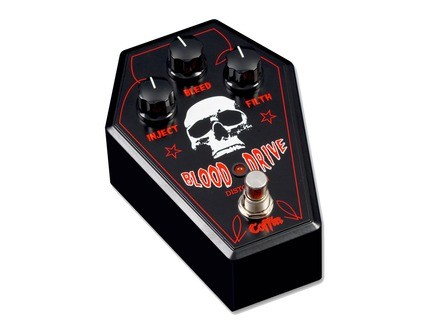 All user reviews for the Coffin Case BDFX-1

Ritonkeupon's review (This content has been automatically translated from French)

Coffin Case BDFX-1
5
An overdrive pedal completely analog, with a true bypass, three knob meets the sweet names of injected (volume) bleed (tone) and Filth (drive). 2 jack 6.35 mm and a wall outlet. The look is unbeatable on a board that farts are entitled to a spider grip and an access cover to the battery quite handy. The design is robust. The pedal is made in the USA.

The setup is very simple. The manual gives some examples which may prove useful for understanding the use of the object, but they're going very fast, so the pedal appears sensitive to the signal of the guitar and play

I emphasize that this is an overdrive pedal, not a big distortion of death such bombing in open clump. The look of the pedal can indeed be misleading. Sound color reminds me of my DS like a Keeley modified but without duplication.

Let me explain, the BDFX 1 is a slightly more boosted overdrive but without distortion. knob the filth is transparent enough to boost the crunch how big blues rock, while staying dry and precise. The tone volume pot affects the brightness of the effect but never turn to garish. The pedal is extremely versatile and even "fully donf" it is not rough. This pedal really respect the game, you can snap agreements or play straight sweeps in the same settings, it sounds! So it really stands out from the rest of the production.

For the style it will suit all but the most extreme styles, but again it will depend on the amp and it can easily be coupled to a heavier distortion. Coupled with a chorus, it sounds nickel for the batcave or horror punk.

I played over the past two weeks, enough to appreciate all its nuances. She interacts well with the setup of the guitar (single coils or humbuckers). The guitar playing is respected, it leaves no chance to imperfections which is rarely the case with other pedals overdrive or distortion (it's weird uh!).

It is not just a pedal lookée is a pedal with a real personality and a great sound as long as one seeks an overdrive and nothing else.
Did you find this review helpful?yesno

synseven's review (This content has been automatically translated from French)

Indeed really ralistes a pedal out of the report qualitprix commain
I use it with a ltd f-50 and an epiphone 70 a model of Anees customize ect ...

I use it for Christmas 2008
I love his style and the quality and more uses the john then five more reason
I is not try other model before but even with more experience I would do is choose
Did you find this review helpful?yesno

kirkinho's review (This content has been automatically translated from French)

Coffin Case BDFX-1
5
Distortion pedals made in United States
With a true analog bypass mode off
Blood drive bdfx-1 for her first name
Unleaded ...
Standard connector, jack in, jack out, and power supply from power supply or 9V battery (same as standard BOSS)
Robust, metal, good finish trs
Antidrapant spiderweb anti-skid (not to make large maps facial action)
Dco specially shaped and that goes with it, got good for those who love. Me.

With a bit of imagination we come to understand the meaning of INJECT knobs (volume), Bleed (tone) and FILTH (distortion) not be allergic condition of the English language ...
Getting a good sound is very simple since no rglage comes out a sound of shit, everything is good! Beginners to put everything I had MOITI "wow cow!" and I jou with knobs and each rglage ... "wow cow!" and I finally returned to rglage any medium, see below.
The manual is clear and funny trs rglages showing five types to illustrate the diversity of sounds you can get.

To say that the effect is effective is an understatement (and frankly rducteur), I will dvelopper ...
As seen prcdement rglages all are effective, we can go at an end of all the buttons, it was something usable!
Premire surprise, rglant low level of distortion you can get a warm vintage sound blues-rock which I did not expect ...
We can therefore choose a sound that ranges from "just distorted" as a lgre saturation, distortion sound from beyond the grave is not without the sweet reminds Młoda that can be natural cost in a factory spices mcaniques between the blast furnaces and rolling mills. Moreover it is described on the back of the box "The bdfx-1 features a classic rich analog distortion and boost circuit, with purpose and gain more tonal control for modern sounds as well as your favorite tones from times past", which compltement is true!
Uses a strat DiMarziotise a very rich sound and flashy trs Dfine well regardless of the low saturation rglage.De pretty strong explosion.
With an LTD M100 EMGtise has become violent, and always brlant trs well Dfine while rglage.Du his blues-rock kind to his factory.
With a 7-string (Ibanez APEX2) becomes a standard, the pedals do not just serious it has all the deficits on hand (the original pickups do not sound powerful trs).
The quality of the sound is good: even in rglage "at max" the sound of a DEFINITIONS extreme, we can run a big fat nag agreement and the ap dployer ge, a will be audible, good quality and well equilibrated trs is normissime! We can not tell any of distortion pedals, instead of l. ..
It is as if its silent cleaned of impurities and harmful that it was useful when you want it o ... stunning! It's as if they had put the scalpel blades on the blade of trononneuse to remain a trononneuse but enough to cut prcise ... This is just my word: "FAIR" !
A strongly advise those who have a guitar too dirty (the "too" is like "not enough "...) or those with a feeble guitar, pedals that" catches the sausages. "
I recommend to others too, this pedals hard hard hard (I said enough?)

I Reue three days ago, just enough time to test thoroughly.
Gnial sound as violent as prcis, "the precision in the bourritude" which allows for beautiful sounds in rglages minis.Elle a range of sounds trs trs wide dedicates it is not a unique type of music: surprised? me too!
I also of BOSS MT2, MD2, SD1 ... None of this power to bring out small acute arpge in the middle of an agreement bourrinass.
The quality-price ratio is indisputable, it is in the price range of concurrency for the largest power!
I believe that with what I said you understood, less well to have an IQ sr infrieur the temprature anal, I would do this choice and I am far from regretting.
Did you find this review helpful?yesno
Cookies help us improve performance, enhance user experience and deliver our services. By using our services, you agree to our use of cookies. Find out more.