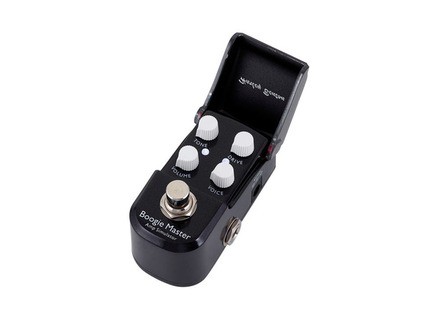 Harley Benton Boogie Master
3
A rendition of the MESA BOOGIE American amp sound. I'm not that much into that kind of sounds, but I admit it has some advantages, so I'll be totally neutral.

It looks simple, yet (just like on a real Boogie) the knobs interact with each other, taking time to adjust the settings... Imagine if there was a full EQ section...

With Gain at 12:00 and Voice full on, I have no problem getting Metallica's "Sad But True" tone with my EMG81-equipped LTD. I'm stunned!

With Gain and Voice full-on, the sound is razor-sharp, but it's noisssssssssssy!

My ISP Decimator has lots of work ahead!

The Tone setting provides a rather dark sound for the first quarter of the knob's range, but after that it soon gets shrilly. To be set carefully, then no need to change it again.

A lot of lows, sometimes even way too much. It lacks accuracy, so an EQ will be needed to fine tune it all, it tends to sound harsh. Some like it, others hate it...

For rhythm playing, the pedal works well., but for soloing get your "compressor/EQ/noise-gate" ready to get an acceptable sound out of it.

This box is said to have been designed for being plugged directly into a PA or sound interface for recording. Duh, I don't like it much, sounds messy! I really prefer to use it it as a "normal" pedal.

On a side note, at home, when I plug the pedal alone with just the guitar and amp, no problem at all... But, when used with a T-REX Fuel Tank power supply, it goes noisy like hell with "whoooooom" sounds as soon as I switch the stompbox on. I've had problems with my home's not-so-recent electrical system so I won't really blame it on the pedal, but at least I've warned you, just in case...

Overall, it's a nice pedal, but it won't be THE ONE versatile distortion in your gearset, especially since there are more convincing models out there.

Cons:
- not as good in solo as for rhythm
- so noisy it requires a noise gate!
- a big buzzing sound to be expected depending on your electrical system
- doesn't sound like a real Mesa Boogie, more like a rendition of it
Did you find this review helpful?yesno
»