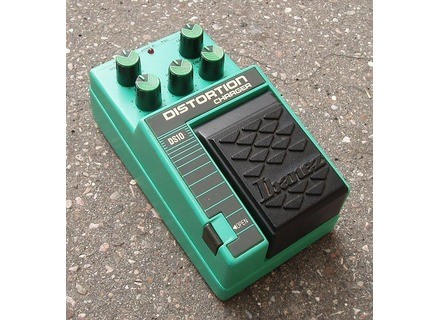 All user reviews for the Ibanez DS10 Distortion Charger

DoWn's review (This content has been automatically translated from French)" Chance encounter .. and profitable"

Ibanez DS10 Distortion Charger
5
Given that there is already a notice summarizing the features of the machine, I am a little exception to the rule, I'll tell my life:

The other day I passed a large sign concealment, uh materials used.

I saw a pedal TS10 tube screamer, green tube screamer as I know (namely TS9 and TS808) but the ibanez brand. € 29, I think "hum a dirty copy Chinese tube screamer, they are not ch .. they even took the name." I still tried my way home. ERROR, I did not know the "Series 10" ibanez! If you look closely, the name is engraved in the svitch, but black on black, not easy to see ....
Once back from my mistake, I went to the sign, but was sold TS10 (yeah, obviously ...). Instead, there was this distortion load is 19 € (!). Now the fact that this series pedal is excellent workmanship, and I hop tests, it is packaged weighed.


Then it is a distortion pedal / enhacer with 5 settings:

distortion / level / bass / high (on a classic distortion) + the level of enhacer.

So there is 1 input and 2 outputs + a plug for an external power supply.

The config is pretty simple, just be aware of the use of two outputs.


The manual (found on the net) is quite clear.

The sound output is excellent quality, the distortion is good, does not bleed, but this is clearly not the ultra violence of death that kills.

It's really nice, though the TS9 style, we recognize the sound Ibanez.

The breath is very moderate, if not downright absent.

I've had some time, but I can not do without. I tried a lot of distortion and this one has something extra.

What I like: the rarity of the beast, the price level with the carpet, the sound, the possibilities offered by the original enhacer.

what I like least: the look, very 80s, it's a little cheap, you'd plastoc the box, but shit, it is big in good metal, solid


If I would have a choice? a million times YES!

Basstyra's review (This content has been automatically translated from French)

Ibanez DS10 Distortion Charger
4
It is a distortion, the distortion "standard" 10 The series of Ibanez.

Rglages for gain, volume, a two-band EQ, classical, whatever. Enhance a rglage more, see below for explanation)

This distortion possde an interesting particularity: a circuit that adds a light on the distortion, adding attack prsence, precision. The clear sound through an enhancer, which refines, making it more slamming, softer or more rounded, as rglages.

The PDAL has two outputs, a "normal" and one that puts the sound enhancer, in bypass. Thus, there is a choice between two modes of operation, the select switch to choose from:

The second mode is hell on an amp a little feeble: in other words it adds something srieux sound, and the Difference between distortion and clean sound distortion is less violent and does not require EQ especially on the amp. I use such a small 15w amp, a little weak, it makes wonders. On an amp more seriousness, the normal mode is sufficient.

When the sound of the distortion, it is fairly standard, like Boss DS-1 (but diffrent), with more range and gain a more prcis EQ. It can in particular serve as clean boost, a bit of overdrive, distortion or big rock mtal even if you want. Trs is versatile, yet simple to use.

This is not the ultimate distortion, away from l. As a DS-1 or Rat, some will like, others not, some find it gnial and others find it invalid.

But it's still a quality of pedals is called Maxon, l (the Tube Screamer ca you say something? Bah is the same manufacturer), no Berhinger ...

As always, the notes are completely subjective and without tural significance.