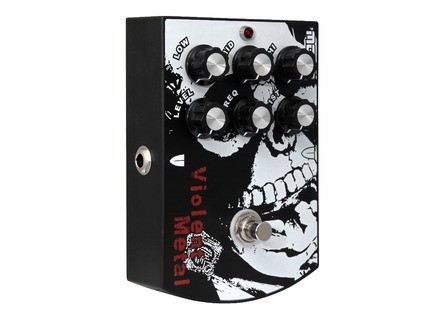 riffeur's review (This content has been automatically translated from French)

Moen Violent Metal
5
Distortion analog color black with a white skull is important, it differs from the black and red model offers a simulation HP (prior notice).
6 knobs that vary from 7 to 5H
- Level - Hi-Low-Mid-Mid-Frequency Distortion
- 1 In, 1Out

It is a distortion, if not to happen to settle back there and buy a classical guitar, it would be better.

Very very big sound, one of the few pedals with which we are not obliged to put the "gain" (here distal) to the cleat, from 9am was already a huge distortion.
By reducing the distortion (between 7am and 8am and playing with the eq and volume is obtained even bluesy sounds (although still thick).
The EQ knobs are effective for the knob Frequency is really a plus.
1 / it connects
2 / is doing everything to 12H
3 / clicked on the switch
4 / [loop start] Kran, Kran-Kran-Kran-UUUU-Kran-Kran-Kran-Kran-Krin-Kre-Tougoudoum Tougoudoum-Tougoudoum-UUUU-[/ loop end] (Well, maybe a 5 / 4 that?)
5 / Raaarghhhh
My guitars are granted Beadf-# b So I had to lower the bass right away, a wall collapsed at the first palm mute (it will be a great American bar), then say:
Low-9AM
Hi-12H to
Disto-12H to
Volume-as you want or as permitted by the neighbors, women, children, parents, cops ...
Mid-to start at 12am and then increase or decrease according to taste.
-Vary the frequency between 10H and 14H is frankly bonnard.
To record rhythm parts, I do take more head out to my rig (for somalig), I plug in my Moen Hughes & Kettner Redbox (HP calculator) and presto, it farts the score!

In Config Live is to say with all the full rig, I had to lower the FX mix half in order to get roughly the same sound on my recordings, at first, with the fx button mix just right (100% effect) the distortion sounded super sharp, not bad in itself but really sharp, if I even looked at my whawha was not engaged.
Ideally, it would sound better in an amp with no effects loop, with the pedals in response between the guitar and the "in" the amp as I do for "home-repeated" guitar-phaser- wah-distortion-delay-amp in, then it sounds of thunder, like a Redbox and direct the sound card.

["important to note, the pedal does not accept strings ibanez for the psu (for her to come back)"] (the record does not, it should be maintained by hand, causing some discomfort to practicing his instrument), she accepts the only transformers Boss, Ibanez, Thomann ... I have not tested with other brands of strings but it seems to me (visually speaking) that the boss may agree.

By quality / price ratio is an excellent investment, I paid about fifty € (including shipping) on ​​EBay at a shop that had a little stock.
Since then, I shall attempt an overdrive from the same brand but I "dig" the web for some time without success, the website is under reconstruction ... pity.

I would do this choice without hesitation if it were to disappear, I've had a little less than a year and has become indispensable.

I put 9 to total due to power supply