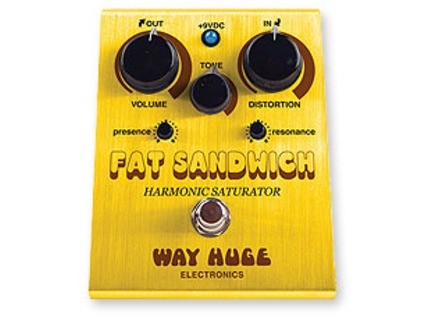 Way Huge Electronics WHE301 Fat Sandwich Distortion
5
The Way Huge Electronics Fat Sandwich Harmonic Saturator is a unique and versatile guitar pedal that is basically a thick distortion and overdrive pedal. It's got standard 1/4" connections for input and output and requires your also standard 9 volt power supply that does not come with it. It isn't rack mountable as it's a stomp box.

The configuration of the Way Huge Electronics Fat Sandwich Harmonic Saturator allows for the user to have a serious amount of control over their sound. Not only are there a bunch of different parameters to work with, but most of the parameters have the capability to change the sound pretty drastically depending on which way you turn it. These parameters include those for volume, tone, distortion, presence, and resonance. The resonance is definitely a welcome addition here to the other more standard parameters, as it's possible to change the tone a good bit with this parameter in particular. I haven't seen a manual for this pedal so I can't speak to it's make up or helpfulness.

The tone of the Way Huge Electronics Fat Sandwich Harmonic Saturator is clearly the best part about the pedal. It's not the type of pedal that I would use if I had to choose one pedal to get all of my distortion or overdrive tones, but for what it does do, it's really an awesome sounding effect. You can get subtle overdrive or go all out with some heavy distortion or fuzz. It's got an extremely thick and well rounded tone overall, and I love having this amount of control. I used the pedal with a few guitars, but mostly a Fender Stratocaster plugged into a Fender Twin Reverb guitar amp for recording.

Way Huge Electronics is definitely one of the best out there when it comes to making interesting pedals with interesting pedals, and the Fat Sandwich Harmonic Saturator is no exception. It has a really great sound to it that can definitely be used for a variety of genres. The price for this pedal and for Way Huge Electronics pedals in general isn't going to be the cheapest, but considering you're getting a top tier pedal with a perfect build, I can't really complain too much about it. If you're looking for something a bit more traditional, I'd check out the Camel Toe Triple Overdrive, bu the Fat Sandwich is an awesome pedal that's worth the time to try out.

Libertopanik's review (This content has been automatically translated from French)" Sounds!!"

Way Huge Electronics WHE301 Fat Sandwich Distortion
5
Well I will not go into the technical features already mentioned so I'll rather go straight to giving reasons to buy or not because it is for all of us interest.

She has enormous possibilities thanks to eight pots to millions of settings: Volume, Tone, resonance and presence Disto + + 3 small knob on the inside of the machine that can pofiner more equilibrium between the Mix preamp and color distortion damage it is difficult to have access to remove the pedal.

In short it is full of opportunity for those who want to have fun and looking for a particular well, I like it personal.

Base is where you turn is it sounds so I contradict those who say it is more difficult to resolve ... is nothing wrong with the 3 basic settings it sounds already hell other knobs are for people who want to find a sound vraiement its own and loves.

No need for manual just a good ear and a little patience.

Qualitée is the appointment, I discovered the brand Way Huge thanks to the delay output suppa puss recement one whose sound is impressinnant short, suddenly interested in me I tested the whole series for me to make a good oppinion and frankly there is nothing as a throw in with Swollen Pickle fuzz or overdrive Pork Loin the "Fat Sandwich" is a Super Disto vraiement with as a colleague said a switch that does not sound when the enclanche and especially not buzz in the background or otherwise. short sound pure and hard that when you push the level it carefully disheveled.

I glue it no more, because it does not need, it offers so possibilitée finally she did not need anything else.

In short you will understand I love, Dunlop has the base, the classic Cry Baby wah in particular, so I can so I loving valid and I sign.

gtbass38's review (This content has been automatically translated from French)

Way Huge Electronics WHE301 Fat Sandwich Distortion
5
- What are the effects or types of effects available?
u no fuzz distortion limits, researchers crunch, go your way
- Volume one (out)
- One in which defines the size of the distortion
- A tone, very effective
- knob a small presence that gives more or less aggressive in the treble
- Another resonance that acts on the thickness of the sound, thorough, full and mini bass sound close to the hp of a phone!
- A switch super nice, no click, detail, but surprising.

- What is the connection? (Audio / MIDI)
audio

- The general configuration is it simple?
yes but the panel is so large that it takes time to find happiness

- Publishing of sound effects or is it easy?
very

- The manual is clear and sufficient? ...
not need

If one seeks a versatile fuzz type distortion is a very good choice, nothing to envy to XXL plus much more expanded opportunities, being able to control the size of cradifier at will or otherwise make good specifies the saturation, acting on its frequency with two small pots, frankly, that's the ball.
I use a les paul goddess (the gibson designed for girls, a small bomb) and precision for low (because I alternate bass and guitar on stage, all in a big HIWATT
200 Custommer bass), and so I was looking for a distortion that can keep down the frequencies for low precisely (previously, only the big muff electro harmonix version Sovtek satisfy me but it was too vague) while being effective guitar, I was interviewed by the Providence ...

I use it for very long, certainly, it's been a year since I also eyeing the Atlantic, I discovered the black box of the guitarist, a report by Dunlop, I flashed on.
this will be the most versatile, usually a little fuzz a parameter, and then it's not a fuzz, a lot of possibilities, the least: I wish the minimum knob "in" or even less saturated, they still attack directly into the large distortion.
I am a power user of the distortion, the crunch in bold Kyuss so dirty, so the driver to the blues through SansAmp XXL, procorat, big muff, expandora, voodoo bass and so on.
quality / price: € 179 in playback, nothing to say ..
yes I would do this choice

jimilu's review (This content has been automatically translated from French)

Way Huge Electronics WHE301 Fat Sandwich Distortion
5
Fat sandwich, just the name dj is funny, if I am sr adventure Franais a manufacturer of guitar effects pedals give his amusing names as wacky as " snack fat "or other, nobody would throw his stuff a look.
Close the parenthse!
This is a classic distortion pedals to tell us, in an aluminum case color "or" trs solid at first glance, with three large buttons for rglages, as the classic volume, distortion, tone. Then two small knobs and prsence rsonance that will play on the color distortion. Plus, the other two indoor rglages the pedals accessible dvissant the four screws (no need for easy tool).
All these are the pedals rglages is really customizable, it can be trying, to find a unique sound, but granted.
Everything is good from analog sr.

Nothing is easier to use, you plug it turns the knobs and we send the sauce. For the shipment of a timber, it nergique to a crunch, will be a hard! The button is the minimum distortion dj good rock. The sound opens up a broad spectrum of use, but it is still rock-hard mmeplutt East, even more brutal.

<img class="smiley" src="https://fr.audiofanzine.com/images/audiofanzine/interface/smileys/icon_wink.gif" alt="wink" /> Ct meaningless sound quality, it's nice pedals and sounds very good and hard. When you push the button far enough distortion found a bit of fuzz, I personally am not a fan, but can please some who seek his lgrement fuzz, while being able to switch later to a distortion straighter, sharper. This is one more!
I would say that we can make the most of the pedals with a scratch team of humbuckers, it is made for the big sound is indniable!

Owner 'I'm not the pedals but I have tried for several days at home with my stuff, I can say that I'm happy, it sounds good trs is net is musical, one can sing the notes.
If one seeks a scratch of distortion pedals today, it's true he has a choice, she lucky! I'm not going to complain, but when I started playing the guitar, there was not much MODELS available on the market. In the limit Now we have a choice and especially the embarrassment! So if we try this kind of pedals that will MRIT it looks, even if I find it a bit CHRE 180.00 euros, even when.