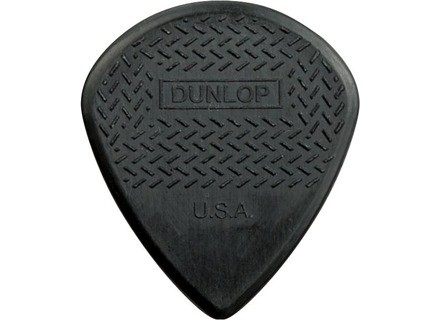 Dunlop Max-Grip Jazz III
5
I had been using the black and red nylon Jazz III picks for close to a decade and was extremely happy with them. While they each had a purpose that I used them for when I saw there were two new choices available I could not wait to give them a try. The new picks appear to be the same shape and size as the original however the carbon fiber variety has proven to excel in many ways above the other varieties.

Like the other varieties this pick is about the size of a nickel with a pointed side. The pick is 1.38mm in thickness and has a bevel on all four sides, perhaps a touch more than its counterparts but that may be a visual deception as the pick has a very matte finish. This model of pick is made from carbon fiber and is also part of the max grip line. This pick is black, maybe a very deep charcoal grey color. This model of pick seems to fall between the original black and red nylon type in its pliability, closer to the black than the red. These picks, like there counterparts, hold there point for a very long time and wear very minimally. They leave very little debris behind even after long playing sessions.

While this pick offers a high level of picking speed and accuracy like its brethren it has characteristics that make it stand out from the others. The carbon fiber variety with has raised slashes that alternate around the handling area of the pick. These are on both sides of the pick and offer a solid grip under the worst possible conditions. The carbon fiber material also seems to have a complex, thick tonality to them that the other materials do not approach. When comparing its tonality to the others varieties it is deeper than the black nylon but with the clarity of the ultex.

Now the reason I find these to be the ultimate metal pick is the way they grab into the strings and the thick pleasing attack they offer. I also find that pinch harmonics flow effortlessly out of these picks with a satisfying fullness of your best hit efforts in almost every attempt. Whether it a devastating rhythm, and intricate passage requiring string jumping, or fast speed soloing these picks just sound flat out amazing. They still retain the ability to move at high speed but seem to afford the player a more definitive strike without a sticky feel off the strings. They do not move as effortlessly as the other models but have an authoritative feel when using them.


If you have tried a Jazz III line before and only found them to be slippery you owe it to yourself to give these a shot. I have found this to be an awesome addition to the Jazz III line of picks. I have been a user of this variety for many years and each type has proven to find a place in my arsenal. If I was stuck with the dessert island scenario though I believe this would be the one I would want but I would miss the others greatly.

Captain Danny's review (This content has been automatically translated from French)" With much better grip."

Dunlop Max-Grip Jazz III
4
I since I started grattouiller there 7 years and like any good guitarist who occasionally go out of his room, I tried everything to have fallen into my hands, all uses that guitarists and bassists that I could use to cross a pack of cigarettes cut through the wooden picks or glass.

I trained bass player, then the guitar I needed a small and precise pick to force me to work on my accuracy (guitar / bass, this is not the same gap between the strings!). I like the fact of leaving really beyond the tip of this small tool, which avoids too engage the pick between the strings and the body and allows you to play faster, longer, and was hand closer ropes, which is very important for me (since I'm the bass player base). I find it like good grip compared to what some people are writing, but I must say that I do not play on stage for long periods of time. Failure to leave its tip contact with the strings and thickness are as dear to me as you feel good strength, his attack and his inflexibility.

The grip really makes a difference, we did not really realize the passing standard flu but when we played some time with the flu and we go back to the standard the difference is obvious ... The grip is a real improvement to the grip of the pick, you sweat like a pig or not. We could just blame him for making the transition from slower pick in the palm of your hand for a passage tapping or fingers before the fry between thumb and forefinger, but it does not bother me because it is not tomorrow with the level I have that I could afford to juggle different techniques in one piece.

Edit 1: I went to Max Grip Jazz III came in between and actually, once you are past the model Max grip, hard to return to the standard shot. I lower my score a point ...

Edit 2: I made Guitar and its small size and rigidity are (in my case) really not suitable as the feeling of the game that I'm trying to get. -1 Point.
Did you find this review helpful?yesno
»

Dunlop Max-Grip Jazz III
5
I just discovered this version very interesting by its grip.
As the notice before I think it will become a standard plectrum because it provides "more" missing from the previous version while keeping the original sound.
Did you find this review helpful?yesno
»

Dunlop Max-Grip Jazz III
5
It is a 3 black jazz all that is simpler with the exception of the grip that allows the pick slide but not with the sweat that could be blamed to jazz 3.

Note that the pick me look more pleasant to the touch and a little less heavy but the sound is not much affected but rather magnified.

I also try the red version and a nylon grip max 1.14 and I noticed the same respect for form and texture of the original pick. Max Grip Series is poised to become a standard.

Pick the perfect amount for those who want to go even further in the work of the velocity. Me anyway I'm not ready to part with it.
Did you find this review helpful?yesno
»