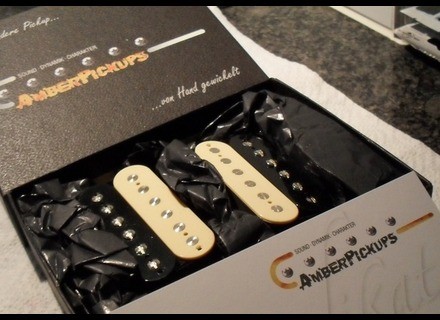 Pucelle_Dabidjan's review (This content has been automatically translated from French)" "59 IS THE PAF RETOOoouUUUUUUR !!!!" (10/10)"

Amber Pickups '59 Crosspoint Set
5
When we talk about micro handmade guitar. We always talk about the experience and the experience of the guy who makes them, as if it was a certain guarantee of quality. To satisfy this segment of scratch I'll be brief. Student Seth Lover, Wolfgang Damm set up his account, he long ago. Official supplier of Gibson before the mark is looking for suppliers in Asia. It is the official developer of p94 Gibson, and was one of the consultants during the introduction of the series Burstbucker. It is as old as the coil and since his teens. So much for introductions.

The '59 Crosspoint was born on a conversation. Now worship conversation between Piper, German music journalist and Damm. Indeed, Piper complained that despite the vast amount of providers in mind PAF pickups. Nobody had hitherto managed to touch the sound of a bang 59. Damm noted and after 6 months of work and the mobilization of several German owners of those pickups, the craftsman finally succeeded, through a process of simplicity in steps, but difficult to achieve by the age of the method labor and components; to achieve its objective. A perfect clone of PAF59.

On the technical details, I do not have much to say. The neck pickup is alnico II and comes with a resistance of 7.3 kO. When the bridge pickup, it is wound from a mixture alnico V (probably tampered if you want my opinion) and is advertised at 8.3 kB. The two coils are woven by hand, the cable is prepared and aged by a process specific to Amber. The whole is more sensitive than other microphones larsens I knew. Probably because of the lack of internal insulation (no wax), but it is not critical in the registry, and frankly, I even learned to take advantage because, in a controlled manner, we can make a tumble overtone series with more ease than other similar microphones.

The resulting sound is pure perfection. If you own a guitar that can do him honor (not easy these days). You will find all the sounds you may expect from such a rise. Tokai on my ls195, I touch sounds Zeppeliniens, Guns & Rosisiens, and other Whoesques vintageries like that. The bridge pickup, to my great surprise, the reserve and can, after a good setup and a receiver receiving enough gain, look towards the heavey metal 80s. Overall, the voicing is rock, earthy without being dirty, organic. The wood of the guitar breathe and treble fly away. Dynamics / sensitivity of its pickups in the game and it is monumental in this area, the best microphone I have ever had to cross.

I enjoyed many good mics in my life. But this is the first time a microphone has everything. The cleans are complex and wonderful wide, break up the mic is nice though racy (this is very rare), the crunch is a breathtaking musicality.

There's no words to define what you feel when using it. But I stress one point: We need your guitar and your playing follow the road. Because it includes all the defects with honesty sometimes frustrating. Do not put all hands then.