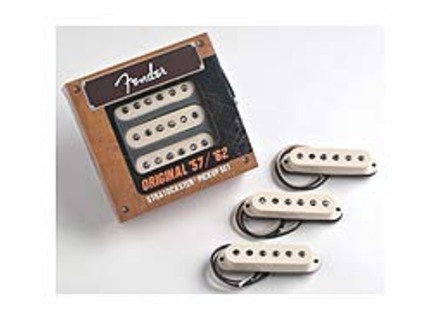 MrMorse's review (This content has been automatically translated from French)" Vintage? Normal!"

Fender Vintage '57/'62 Strat Pickups Set
I have this set for several months mounted on my Mexican Strat customized for ages: no complaints. Good sound Fender families, normal!
Previously I played on the original set, good bah fine but less well defined I think. Then I bought several different sets noiseless pickups on ebay ... basically I was fooled, the set is odd ...

Today: apart from its inherent buzz single coils I have no regrets! (Not nothing at all ...)

For those who want sound Strat origins uncompromising.

Price / quality: I got a great deal, since the set on ebay often pass within 150 €, then I for almost half price.
I do it again this choice without hesitation.
I put 9/10.
View price information
Did you find this review helpful?yesno

KirKill's review (This content has been automatically translated from French)" Yes ..."

Fender Vintage '57/'62 Strat Pickups Set
5
I installed it on a Fender American Standard maple neck, being a former owner of the CS model 69 (on a Fender American Standard rosewood handle), I took the microphone to test the 60's side of the force ...
The crunch and fuzz tones, surprise .... he returned in better compared to its big brother, the dynamic is completely different, the sound is sharper than it saturates more, the CS 69 seems more dull the blow
The clean is softer less aggressive than the CS 69
Reviews of these mics differ a lot, everyone thought that the CS 69 pickups remain the rock 70's default, after this test it is not so ... The Vintage 57/62 has the character
I think the CS 69 should be the mic of choice on a rosewood handle and Vintage 57/62 on a maple neck, with hindsight I prefer the maple neck config + Vintage 57/62 rosewood handle the config + Custom 69