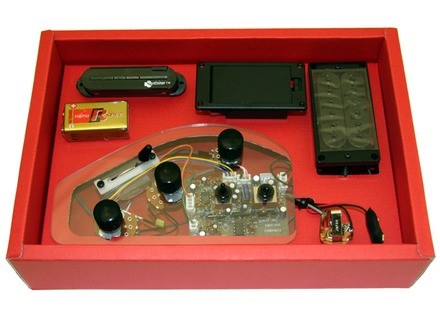 Fernandes Sustainer FSK-401
All these people who wanted an opinion on the kit Fernandes FSK-401 Sustainer, I'm here ^ ^

I play on Fernandes guitars for over 15 years now and almost all my guitars are equipped with Sustainer
FYI, on which the guitars I play are the MG models signing hide, X Japan guitarist, a form Mockingbird (BC RICH)

If you searched information on the Sustainer, so you understand that it is a micro whose function is to excite the string to make it vibrate to infinity and thus obtain an endless sustain

The FSK-101: a sustainer DOUBLE format, which has two functions: normal (to prolong your notes with a normal sound) and harmonic mode (harmonic transforms your note and making it last).
This is the sustainer cheap brand Fernandes, is the one found on guitars Ravelle, Revolver, Vertigo and company in short patterns distributed in the United States and Europe.

- FSK 401: a sustainer SIMPLE format (which is often accompanied by a dummy) so we feel it is a humbucker, but in fact it is a simple microphone and just below A micro cache that mimics a physical micro). The sustainer is the backbone of the brand in three functions: the normal mode, the harmonic mode and melting mode in the middle (which is a mixture of two modes, so have your note and your rings normally in harmonic environment at the same time)

the sustainer CHIANTI IS! walking a real headache. Quite fragile to install (I had to break into 2 or 3 by installing on other guitars), two knockouts must be a cavity-mail, so let the circuit) and the cavity of the neck pickup, you must dig at least 0.5cm (because the sustainer is a deep micro)

or the installation is easy! all clips on the circuit ...

On price, Fernandes is poorly distributed in Europe, so it comes quite expensive in stores ...
On import, you can find the FSK-401 to about € 250 (if we are lucky we do not eat the Customs)

I think I made the rounds of the thing

ah! it has a competitor, the Sustainac, which has roughly the same functions, but I know very little as the brand is badly distributed, if at all ...

13 of 15 people found this review helpful