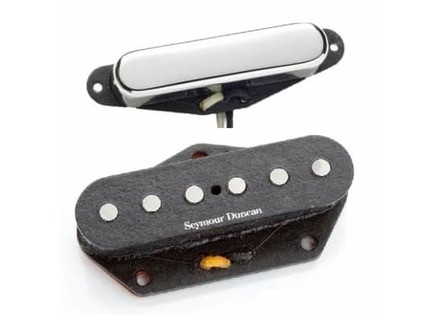 Seymour Duncan Alnico II Pro Tele Set
5
This set is made from 80 if I remember correctly.
I use these pickups on a Fender Tele lite ash. Good definition, its typical fenderien. Its beautiful clear especially in the neck position. These pickups are made primarily for blues and rock, the TRPA-1 may even be jazzy. They also have a "modern" because, although they support the saturation while remaining faithful to his Fender. Value interesting and versatile set.

Seymour Duncan Alnico II Pro Tele Set
5
I was looking for pickups to replace the original ones on my fender tl (MODL Japan)
say frankly that the taient for!!
Only the rhythmic micro silent and out drinking a cool sound but the ds is happening on the mic lead and middle c'tait the drama ... Agues kill you for the ears, a lousy definition. In Breff, c'tait has not!

- The report qualitprix
- Made their respective Low, Medium and Ague.

The sites of the manufacturers you have the possibility to listen to the samples DIFFERENT MODELS. Tlcharger them, ask yourself a good headphone, Listen, compare ...
So I stopped on the microphones I cit prcdemment they rpondaient done all my needs.

They are single coils, so no change from the conventional assembly of a son by micro tl 2 (one black and one yellow).

The quality silent she go to?
Once editing is complete I had a small apprhension, "and if c'tait worse?"
I plug in my head so my tl ENGL any hot dj (tell me if I'm too exitant? s), and begins its rhythmic clear on the microphone, I want to say " wouaou "Besides, I say:" Wouaou "!

The definition of sound is superb, a beautiful sustain, I'm playing the 1 / 2 hour before switching to the next position ...

Following position:
Of the three positions available on my tl is the worst, its a less enveloppbr bcp /> that rhythmic position, with less bass and Agues.

Lead Position:
Wouaouu ok ... I see the better! TRS beautiful Agues that do not break the ears

always a good DEFINITIONS trs for each string.
The sound envelope that was in position rhythmic disappeared and is replaced by a bcp's drier and more aggressive!

rhum66's review (This content has been automatically translated from French)

Seymour Duncan Alnico II Pro Tele Set
5
-From one month: I have finished building a house telecaster type 62: rosewood / body aulne.je wanted no microphones mild acute screaming from where the alnico 2, is less bright than the alnico 5.
I wanted my TV is on the side rather than crop of steve danny Cato: soul and rock rather than country.

"I had tried these mics on James Trussart TV (it's a lot of competition mounted in antiquity but also from home ss much more expensive).. I had also tested on the Fender KOA TV, and every time I 'loved their ability to remain cool-air and roaring crunch in ...