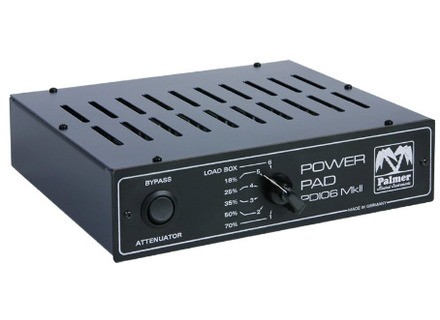 ricoute's review (This content has been automatically translated from French)" good camera but can not be sufficient in some cases!"

Palmer PDI 06 MkII "The Sponge"
4
Since my one week

THE particularity nothing to report, except the cabinet and construction sounds serious.

Least, be forced to choose a model with a specific impedance (in this case 8 ohms but some are rather vintage hp to 16 ohms) so it's a disadvantage (especially lorqu'on a head + cab and considering that at one time or another to change cab)
It may either be limited by the choice d of a cab depending on the impedance data (the universal version 8ohms) in the choice of cab or override, and have pdi06 unusable and useless and suddenly !


The manual is not too explanatory in nature cables to use, they have been supplied with, it would have been better.

because there are 2 connections:
- 1 output to the head into the socket of the rated amp pdi
- 1 of the IDP in cab

is the head of the IDPs, I asked myself whether we could get a cable modulation (like the amp in a pedal) or had to be put also a cable connection type hp mark? ??

My rant (well in my config) carvin V3M head of cabinet and black mesa with hp Ev
I puvais use but according to the positions of 0.5 to 1 position MAster

I thought logically (my amp is only 50w and still I do not use that 22w) with the position providing the greater attenuation of the signal by 18%, I could not get the master that position master 2.5, therefore fundamentally insufficient attenuation factor issue in my case (I would have liked to be able to master the 4 or 5 without problem.
No significant change in terms of use but, despite its attractive price, can not be sufficient.
The use of pdi06 does not suit me ... just not, and is returned directly to the store.

You will probably consider that my conclusion not not be good, but I'll qualify.

Actually, I think a 20/30w amp, the 18% maximum attenuation could go, but the great powers, it is not usable, even if the sending carvin heavy anyway!

But I think the choice of Palmer, can be understood is focused on having a correct attenuation, but not degrade the signal which is even more altered gradually as one moves the attenuation value. The model with the koch Loadbox 2 (350 € does not seem too affected the quality of the signal but crashes when even fairly large dynamic range.

For the IDP 06: I found that there was a clean attenuation and better definition almost intact.
on the other hand in crunch and saturated, the signal is quite altered in its grain and dynamic, with 18% of relative attenuation, the degradation is random (it does not happen all the time) because I wished no change of its (If I take a lamp amp is not amoindir its return), so I decided .... not keep Pdi06

I watched Koch, even the big version 2 does not seem perfect either!
I have not found the solution (and good attenuation without loss of sound and not a price <350 €) and a little fear in the background to add this kind of case sometimes considered detrimental to the output stages of the amplifier.

I think the pDi06 is not a bad camera, but a bit restrictive,
(The previous version of bcp Pdi06 was also more impressive with a knob mitigation manageable continuously like a volume knob was a better idea yet he must have attenuation range up to 5 or 1 %)

As for me, I suspended all research in this field and a friend told me it was a bit weird as accelerated as (thus unlocking the power) and slow at the same (and thus limit), it n ' was perhaps not entirely wrong ....

Zouzou52's review (This content has been automatically translated from French)" it does the job!"

Palmer PDI 06 MkII "The Sponge"
5
I had just acquired a 60 Fireball and Engl E212VH cab, and there was everything to go: the sound, dynamics, power, in short, everything I was looking for some time.
Only problem: playing at home without having to use hearing protection and without bringing down the wall of the neighbor across the street.

It occurred to me that the best solution was to go through an attenuator. I started looking for the object and I quickly came across this Palmer: attractive price (200 euros) compared to other models of the genre (and koch THD) and very good advice on other branded products but nothing on this one ... I said, "I try to buy blind!"

Well I do not regret at all, connected between the power amp and HP gear has done its job: 5 steps to mitigate progressive sending the desired power to the HP, the surplus is converted into heat. In addition it has a load function and a bypass box.
I did not notice any loss of sound quality, all frequencies are made, the only difference comes from the fact that chamber volume, there is not enough potatoes for the V30 can enter my cab enough to vibrate and give everything they have to offer.

So, in conclusion that Palmer is a very good compromise for those who want to take the power of its tube amp without tearing their eardrums, it allows in addition to not buy the stuff for the house, you can keep your amp and be used in all situations.