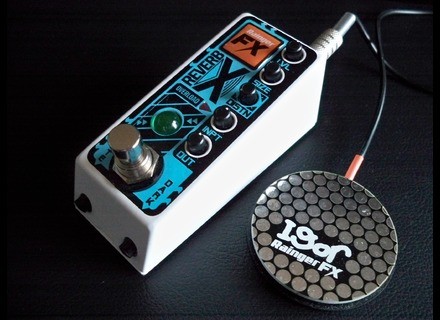 Rainger FX Reverb-X
5
SOUND:
The Reverb-X by Rainger FX is is very basic in terms of the reverb ‘sound,’ as well as being clear and obvious (certainly not muddy). Some reverbs can be too much and necessitate a clean guitar signal – otherwise, the tone gets lost. Reverb-X can work with dirty and high-gain signals as well as clean. Below is a demonstration video of the Reverb-X, including an instrumental composition in the second half that puts together many different settings, from a snappy drum-room to a large cavern.

As stated, this is a straight forward reverb insofar as the ‘sound,’ while offering up to 6-seconds of reverb time. To explain, some reverbs offer an ‘icy’ quality, whereas others cascade notes for an arpeggio-type effect. The Reverb-X is very bare bones in that you get one particular reverb quality, although it can be manipulated very nicely. When dialed down low you have a snappy drum room reverb (great for that spanky 50’s guitar sound) that can escalate all the way to a large cathedral or cave. And then you can customize it even further.

There is a push button at the bottom front of the pedal that allows for either a ‘bright’ or ‘dark’ reverb. And then there’s a Distortion knob that makes the reverb signal (not the guitar signal) gritty, which is a very unique feature. And there is a Gate function (a second button on the bottom front of the pedal) that produces a cool effect by cutting off both the guitar signal and the reverb mix signal once you stop playing (working a chug or choppy chords sound pretty cool with this feature). And then there’s Igor, a pressure-sensitive pad that, when connected, controls the reverb signal – this means you can play a chord or pick some notes and you will not hear the reverb unless you step on the pad (and then the reverb trails off once you step off the pad).

OVERALL IMPRESSION:
I really like the small size of the Reverb-X is and that it still has a host of features (Rainger FX also produces other pedal effects of this size, which means being able to fully equip a pedal board with about 10-inches or 30 cm of space). It’s not much larger than one of those ‘door stopper’ wedges you buy at a hardware store, and it actually reminds me of that.

For its size there are so many features on the Reverb-X including the ability to have a bright or dark sounding reverb; and the ability to add some distortion or grit directly to the reverb signal (which adds to the dirt when playing with some gain or distortion). The Gate feature is very cool, stopping both guitar and reverb signal on a dime. The ‘on’ light is an unusually large LED (the largest I’ve seen on any pedal and definitely large looking on this ‘wedge’). There is an overload light that indicates when you should reduce your input signal (for a cleaner sound), and all inputs are in the back to save on pedal board space.

Now, because of its small size, the Reverb-X may be a bit cumbersome to use on stage if you like tweaking or changing settings often, and due to the small knobs, although the Gate and Dark/Bright buttons push in and out rather quickly and are easy to locate. Nonetheless, the ability to tweak quickly during a gig is relative to how familiar you are with your equipment and whether you need to make change to your reverb, and so that may not be much of an issue.

EASE OF USE:
The Reverb-X is easy enough to use, although there are several tonal differences at your disposal and you will have fun tweaking and experimenting. Insofar as setting the input and output correctly, the Reverb-X has an overload LED that indicates when the sound is clipping, which means reducing the input. Obviously the output level coordinates with the gear you’re pumping your signal through.

Common with any reverb, there’s some fiddling with the Level (mix) and Room Size. Maxing both gives you that large cavernous sound, whereas keeping the mix low with the Size up gives a nice spacey or ambient quality without being too distractive or ‘out there.’ Conversely, a modest amount of Size with a lot of Level gives that classic slap-back type reverb effect so common with guitar instrumentals of the late 1950s and early 1960s.
The Distortion knob always is ‘on,’ although when turned all the way down you don’t hear it. This knob produces a gain effect on the reverb signal only, described best as a sizzling grit. It can sound very different when mixed with a clean guitar signal, but also adds to the dirt when using distortion or drive. I found I had to have it around 12-noon for it to be audible (for it to be apparent in the mix), whereas all the way definitely made the effect well defined.

Likely the trickiest part of Reverb-X is Igor – not that it’s hard to use, but compared to the rest of the Reverb-X it takes a few minutes of practice. Igor triggers the reverb signal, so that you can play dry and then kick in reverb when you want it by stepping on the pressure-pad – a very unique effect in its own right. The harder the stomp or more weight on the pad the louder the reverb response, which trails off once you step off. This produces an effect similar to a volume pedal in that there is a swelling of the reverb. And so, if you pump your foot on-and-off Igor, you can produce a nice pulsating reverb, which is very cool.

RELIABILITY & DURABILITY:
The Reverb-X is a solid micro pedal, consisting of steel casing with a sturdy foot switch. The knobs are plastic, but they are set much lower than the foot switch. I also like the angled shape of the pedal, making it more ergonomic for stomping. What makes the Reverb-X very functional, which increases its reliability and durability is that all the inputs are in the back… the guitar input, the output, the power input and Igor’s input. This keeps all the cables out of the way, besides saving on pedal board real estate.