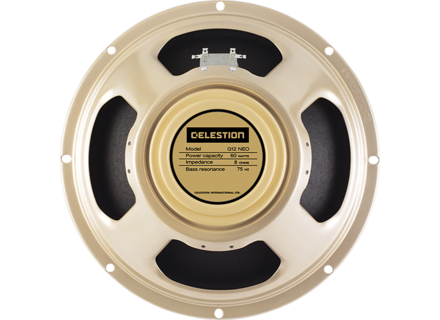 birdy's review"A precise sound, with a "thank you" note from my back"

Celestion G12 Neo Creamback
5
I ordered 2 Celestion Neo Green back from my favourite UK speaker dealer.
This is the 16-ohm version.

I own a Budda Superdrive II 2x12 combo amp.
This isn’t a heavy amp for a 2x12 (26kg, approximately 58lbs) but since it only has a single handle, it’s well enough to break a musician’s back.
This amp’s sound is very dark on the overdrive channel and delivers a loud loud sound (the original speakers, the Eminence-made Phats, weigh in at 5 kg and deliver up to 103dB!).

Replacing the original speakers replied to several aims:
1. making the sound better, to make it more precise, keeping the lows but pushing the trebles a bit further. Also, I’m used to Celestion speakers and as a rule I don’t like Eminence speakers, so I wanted a bit more “Britishness” into the sound.
2. making the combo lighter, so as to avoid visiting my chiropractor every time I moved it.
3. Turning the overall power down to be able to get the master volume beyond 10% (even in rehearsal!).

In the end :
1. Soundwise, it’s perfect. The sound is avesomely precise. I’ve kept all the lows but they sound more dense, less on the drippy side than the Phats. I earned more mids as it’s a model M-based Creamback, but I also gained highs which are precise and not shrilly at all ==&gt; first point, done!
2. Regarding the weight: no question necessary, the original speakers weighed in at 5kg each while the Celestion Neo weigh barely 2. In the end, I find myself with a 30W all-tube combo with two 12” speakers for a total 20kg all ==&gt; second point, done!
3. Power: the power has diminished indeed since I got from 103dB speakers to “only” 97db ones. Unfortunately, it still delivers very loud, but now I can get the master up to 2!

The Budda is a very dynamic amp with a superb clean (you can get from a rather fat, Marshallesque sound to another more on the Vox side) which reacts very well to stompboxes.

I feared I would lose on these fields in changing the speakers, but that didn’t happen. These Neo Creamback render the amp’s dynamic very well and the pedals still work as well.

I’ll also mention the price, which I consider very acceptable as the Neo Creambacks are priced the same as the classic G12H Creambacks.

I’d do the same choice if I were to change another amp’s speakers.