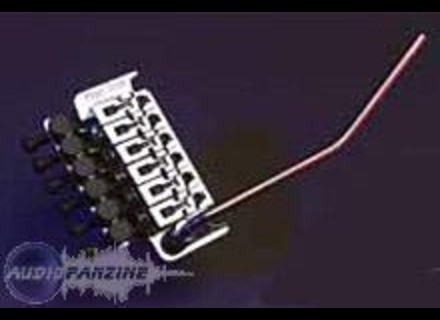 Floyd Rose Original
5
I got this on a guitar I bought used. Took it off and put it on one of my better guitars. Luckily it was a direct replacement so I didn't need to do any retrofitting. Only problem is the nut is much taller than other brands so I'd either have to shave down the neck shelf or use a different nut. I went from a cheap licensed one that the knife edges had dulled out resulting in not returning to "zero" so it wouldn't stay in tune. This was a great upgrade. Now I can dive bomb, squeal, and flutter without it ever going out of tune. The trem bar sit in and has a thumb collar that screws on, personally I like it a lot. Allows me to loosen or tighten it just buy turning the collar, I don't have to spin the bar around 20 times like other trems.
Another great feature is it comes with a brass block. Brass has been used in instruments for a long time for it's great musical qualities. It transfers vibrations and resonates very well so it's much preferred over other metals. There are upgrades for it such as a brass “big block” which just has more mass to make more resonance. There are also titanium blocks but I have no experience with them.
I have nothing bad to say about it but there are a few companies who do. Recently Suhr and Tom Anderson guitars have stopped using the Original floyd rose in favor if the Gotoh floyd rose. Stating the Original has severely dropped in quality in recent years. Also stating that on average every few pieces they get in have to be machined and ground to take off little bumps and edges that would mess up intonation and a good contact point. I haven't experienced any problems so I won't comment. I do own a 1990 schaller and new gotohs so I'll do reviews on those as well.
Did you find this review helpful?yesno
»

Septicaemia's review (This content has been automatically translated from French)

Floyd Rose Original
4
About 7 months of use

Report quality price unknown to the latter the original silent hill on the guitar.

no problem I would do the selection. jaime the floyd rose, and floydrose original floyd is a good, reliable, maintenance laccord good, with great action game (you just get very low and very high up)

the small catch, sometimes the lack of long sustrain

Floyd Rose Original
5
Several guitars in Floyd Rose tremolo, or vibrato said conventional kind or Schaller Wilkinson .. In all, 3 guitars épuipées in Floyd, 2 and a Les Paul Classic that should come in for processing poses a Floyd.
Cash major blows without flinching rake the top, the agreement remains in place despite the extravagances of wrist shots surly ..
I could compare well with guitars, with more than 30 years of use vibrato on different models.
I tried many guitars, and I always come back to models with Pink Floyd.
I hear a lot of nonsense on the subject: gnagnagna ...., because this is boring or because it ... etc ... Often lack of maturity, intelligence or experience, sometimes all three. It's so simple to properly resolve a floyd and change the strings. All you need is just a key 8 sides and a small cutter. Make your setting once and for all for a pull string and not change it anymore .. and you will see that it is at least as fast as changing strings on a classical vibrato, which sometimes are boring holes in center (those who change strings often include me).
In short, this is one of the best systems vibrato / tremolo exists, and whether in the classic version or some derivative versions, it is a joy to toy with the handle ......
My latest acquisition, a Gibson Les Paul will also go in the luthier for modification and installation of a floyd, and it will be my second LesPaul equipped in this way, nothing but happiness ..