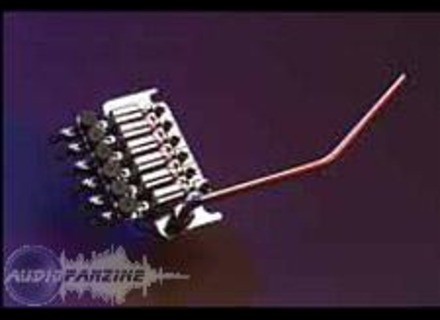 racerevlon's review"The most stable and user-friendly Floyd I've ever played."

Floyd Rose Speedloader
5
Once upon a time, I was on a popular internet auction site and saw this BC Rich ASM in what I call the "Swimming Pool Blue" finish. Great-looking guitar, but something about the picture was just a little... off. I looked and looked, and couldn't figure out what was bugging me. I then turned to the brains of the operation (my wife) and she said, "There's no tuning pegs on the headstock."

Enter the Floyd Rose Speedloader. I purchased the guitar and have never been happier. The guitar itself is rock-solid, but the Floyd Rose Speedloader (FRS--I'm gonna get sick of typing that out) is truly remarkable. It feels just like an OFR, but stays in tune through mega-punishing tremolo dive-bombs, flutters, squeals--whatever you throw at the FRS, it returns to pitch and then laughs at you for even TRYING to make it go out of tune. Now, don't get me wrong, there are still the fine-tuners on the bridge, and every now and again when there's an extreme temperature change or something you'll need to turn a fine tuner 1/4 turn, but that's about it.

The FRS is set up for a specific gauge of strings and scale length, then you just buy that gauge/scale of Speedloader strings. Mine are set up for .009s and it's just bliss. Like any other Floyd, string gauge can be changed or the bridge can be set up for drop tunings via small adjustment screws in the bridge, but all these operations are MUCH easier on the FRS than on an OFR or any other licensed model. String changes take about 60 seconds start-to-finish, and the new strings are usually within .005 cents of being in tune, because they're made for the exact scale and gauge of your guitar and bridge. I've got a 25 1/2 scale with .009s, so I buy those strings. If you have a 24 3/4 scale guitar set up with .010s, you buy those strings. SIMPLE!!!

The bridge saddle has a quick-release lever that raises the saddle, slacking the string to the point that you can remove it from the bridge and the nut, then seat the new string, snap the saddle back into place, lather, rinse, repeat. The strings have special brass cylinders clamped onto either end that slide both into the special nut and the FRS bridge.

It takes a little getting used to the visual of not having tuning keys on your headstock, but the trade-off of being able to dive-bomb with impunity is worth the trade-off. You can also check out videos of the FRS in action via Troy Grady's now-famous amp shopping excursion at Ultrasound Rehearsal in NY--the QuickTime video is HUGE (484.61 MB) but you get to hear a lot of cool amps, and you get to see his Washburn Nuno (or Face Eraser... not sure) that has been retro-fitted with the FRS--the holes are still in the headstock where the tuning keys were removed and the new nut holds the top ends of the Speedloader strings. You can sort of see the picture without downloading the file, but it's a good listen if you've got the time and the bandwidth.

Bottom line--the only reason I can see that these haven't become the "tremolo of choice" for any heavy tremolo player is the difficulty of finding the strings. Most often, I just order them directly from the Floyd Rose web site because not every large Center that sells a Guitar (naming any one explicitly would be irresponsible) has the strings just hanging on the wall.
Did you find this review helpful?yesno
»

innocent.moon's review (This content has been automatically translated from French)

Floyd Rose Speedloader
So I have not had time to use it for long because the cavity for the floyd was too small then he laid against the fund as a fixed bridge: / then it is a party at the luthier, I expect they have finished in ca.
I know this will seem VERY already con but I rather like the idea of ​​playing on an ORIGINAL floyd rose. the gear is already very beautiful, I like the system that allows you to change rope fast enough, personally I play on a guitar and play without using the head seems a little twisted so I do not use ropes Speedloader I DR put my old password and ca niquel, much like the first types of flora, but ca not cut, there's less friction ... basically it's cool.
Ok, so I have not tested thoroughly but ca avai air well enough to hold the tuning.
I tested the vibrato of vieu Ibanez RG250 (attention is the big ^ ^) licensing course as well as the (still licensed) of warriorXT jackson ... in terms of value for money I have had a € 300 and I always find it expensive, the material of music still costs a fortune ... whether this choice I would do I'll wait to look into.

Hellmuth's review (This content has been automatically translated from French)

Floyd Rose Speedloader
5
I use a BC Rich NJ Ironbird (VERY good guitar!) For some days.
This is an Original Floyd Rose, so it is plaizir was a real trick in the hands (not a copy).
Concerning the system-say, it's just great! Change of rope is made in 5 seconds (on apuis on the bridge, you push a bar, we change the string, and clip!), and keeps all the tuning was great.
The strings are a little more expensive than normal, but (contrary to rumors) are found partour since it is distributed by Dean Markley.

Otherwise I'd like to add for the moaners (and for all the curious ^ ^) which quibble to drop to D (or detune) as true metals: in place of the mechanical head, there is a small screw on each bridge which is operated with a 1.5mm Allen key (it's small!), so in fact we s'acorde just like a normal guitar, except that much more precise and therefore longer.

In conclusion I would say it's really an innovation impressive! I played (and regulations) of normal floyd, and I must say I'm really not attracted this system.
Did you find this review helpful?yesno
»