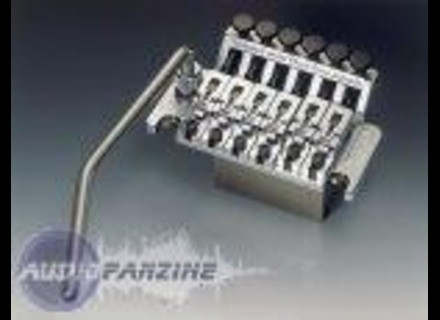 Schaller Tremolo System - Licensed under Floyd Rose Patents
5
I got this on my used 1990 Jackson Rhoads Pro and haven't had any problems with it. For a 22 year old bridge it's holding up VERY well. The knife edges look brand new and there's no rust anywhere, without me just saying it there'd be no way of knowing it's 22 years old. Just like the original these things are great. I can dive bomb, squeal, and flutter and have the bridge come perfectly back in tune every time. The deal with the knife edges is that if they’re softer metal then over time they get worn down from pivoting on them. Once it’s not sharp anymore the bridge can’t return to “zero” thus keeping it in tune. Bending and using the bar makes the guitar go out of tune. Having hardened steel knife edges, like the Original, Schaller, and Gotoh, keep them sharp for much longer. Like this, it’s been 22 years and still sharp. Most licensed ones can go bad even within the first year.
These Schallers are a bit more expensive than the original so that's my only complaint, I'd rather spend less and have the original.
One complaint I've heard is that these are made out of zinc (like cheaper licensed ones) but have hardened steel knife inserts. The problem with them being a softer metal is that when intonating the bridge when you tighten the intonation set screws they can sometimes strip and become useless. No fix for it and AFAIK the only option is a new bridge. Schaller has since fixed the problem with inserts for each screw but on older ones it was a problem. Again I haven't witnessed this so I can't comment. Most Schaller floyd roses don’t say Schaller on them, they’re normally licensed from a guitar company such as Washburn, Jackson, Gibson… and has their name imprinted on the bridge instead. They are still the same bridge, just with a different name.

sckib's review (This content has been automatically translated from French)

Schaller Tremolo System - Licensed under Floyd Rose Patents
5
I use it for 5 years, one can thoroughly went to the dimebag, ca not move !! up or down it returns to its original place is known to purr has petrucci is a marvel.
I try lo pro edge, edge, that of a jackson jr94 the TRS2, and they do not happen to have the ankle just
there is always the inconvniants change longer strings a tune o matic or whatever, but this is the top of floyd without hesitation I redid the
Did you find this review helpful?yesno
»

N2h2's review (This content has been automatically translated from French)

Schaller Tremolo System - Licensed under Floyd Rose Patents
5
Mounted on guitar luthier for 2 years, at earlier used in place of jackson floyd on my DK2.


Accurate and robust, this will be the two words to choose first.


-No easier or harder to settle a pink original in revenche more precise.

-Much more resistant to wear than the Gotoh (edge ​​pro & Related) as used for 4 years, mine has no wear marks, my Gotoh chrome has lost his place in the hand rests or less 2 years: (.
With adjustable wear-free power cords knives.
The not referred does not eat up the allen wrench hole remains perfectly hexagonal, even forcing it.

Can replace a floyd-jackson, esp, ibanez, without any modification of violin, surely the other but I do not advance on this point.


Floyds of all tested, this one remains my favorite because of its robustness and back are a perfect balance without any default, the view of most of the paint friction is far superior to competitors.

It just does not deserve 10/10 is not available because in many colors which for me have been a plus.

vikos's review (This content has been automatically translated from French)

Schaller Tremolo System - Licensed under Floyd Rose Patents
5
Hi! I have made possible a floyd (Shalla) on my Start for 1 year and that is enough gnial but we like it or not.

defaults: more than you can 't give in RBR /> to change pulling you cry

I have opt for the brand shall and I 'm glad trs, but it must be on s' crack before buying because all of the same rather expensive and it takes time to really s 'crack in well.
But when floyd is THE same vibrato so I do not really regret.

Did you find this review helpful?yesno
»
Read the 6 user reviews on the Schaller Tremolo System - Licensed under Floyd Rose Patents »