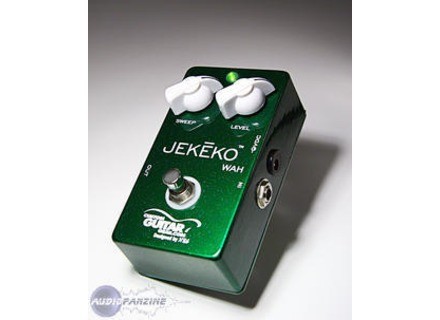 All user reviews for the Custom Guitar Gear.com Jekeko

Custom Guitar Gear.com Jekeko
5
The Jekeko pedal is a pedal made to replicate a distinct sound. The pedal replicates when you find the sweet spot on your wah pedal. The wah pedal has been a staple in pedal boards since the 60s because it is a great way to make your tone stand out. What makes the wah effect so dynamic is that it emulates the frequency filtering that occurs in the human voice. The name of the effect itself is taken from the filter sweep that happens in your throat when you say the word “wah.” Wah pedals with a narrow band only produce frequencies that are very close to the center of the frequency you specify by the position of the pedal. When you stop the sweep of the wah at a certain point you can get some cool sounds and some nice snarl from it. The Jekeko pedal emulates a wah parked at a certain position. The pedal is fairly simple it has a sweep knob and a level knob. The sweep knob simulates where the wah pedal would be. With the sweep knob all the way to the left it simulates the wah being down at the heel end. With the sweep knob to the right its the sound you would get with the toe end of the wah pedal down. The level knob controls the saturation of the effect. There is a green LED to indicate when the pedal is on.

The simple design and sturdy construction means this pedal is durable. Because of its design it is more durable than a real wah pedal. It does not have to take the weight of a guitar player standing on it all night. The knobs are big and can be adjusted by your foot if you want to. It features true bypass switching so it will not color your tone when you do not want it to. It has a 9 volt DC jack on the side for power. The chassis is sturdy and made of metal. It is pretty narrow so it will fit well in your board.

The Jekeko is like a more exact wah pedal. You can dial in exactly what frequency you want the wah sweep at. It does not lend itself to endless wanking like a normal wah pedal does. It is more setup for delicate adjustments. You can get your classic parked wah sounds that you have heard from Tony Iommi and Eric Clapton. The level knob gives you a bit of boost if cranked and you can get a really honky sound.

If you want a certain wah sound and dont want to have to look for it every time you turn your wah in you should get a pedal like this. The Jekeko pedal lets you set the specific wah sound you want and it will go to it every time instantly.
Did you find this review helpful?yesno
Cookies help us improve performance, enhance user experience and deliver our services. By using our services, you agree to our use of cookies. Find out more.