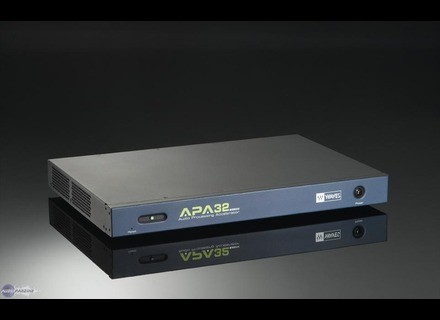 All user reviews for the Waves APA32

Average Score:2.0( 2/5 based on 2 reviews )
Not satisfied with those reviews?
Our members also liked:

Waves APA32
3
I bought this piece of hardware a few years ago, before computers suddenly had a huge surge in processing power with the advent of dual core and quad core technology. It was very easy to setup and install, Waves definitely got that part right. You basically just connected it to your computer, and installed special software instances of plug-ins that would be set to run from the processing power of the APA instead of your PC. They included a lengthy, wordy manual that could answer any questions you may have had. They also had great customer service when I had a part fail on it at one point. The warranty covered it, and I was shipped a replacement very promptly. I continued using this after upgrading my computer, not yet realizing how useless this had become. Back in the day, this was a very useful piece of hardware, because you could run a lot more of the great Waves plug-ins without killing your CPU. At that point I would be lucky to run maybe 10 instances at a time natively on the CPU, this hardware more or less tripled that, and for slightly less than $1,000. Things have changed though, and now this is sitting on a shelf collecting dust. I believe Waves is still trying to sell these things though, for some reason. You can now easily get a new motherboard and CPU that will process 20 times as many plug-ins as this piece of hardware could, and you'll pay half as much. It really is that big of a difference. It was a great value back then, it's a terrible value now. I just wanted to strongly advise against getting into any of these kinds of static gear investments that will grow outdated in a short time. Leave these things alone and keep your computer updated instead! Native processing is the present and the future.
Did you find this review helpful?yesno

lussahstudio's review (This content has been automatically translated from French)

Waves APA32
1
Waves are a little crazy in the head people ...
Dj that the price is more than the others ... CHRE
What is more, it provides only two plug-ins ...
But, again, we knew it by buying it, so we took it on us and bought the same as when we use a lot of plug-ins the company ...

Well surprise: it's so much noise that a plane full acclration ...
EXAGRES noise that comes out of this machine ... They screwed up a little fan makes a racket monster! But everyone does not have an engine room to isolate this type of device.
In other words, it is difficult to mix with an air of self cot ...
So, it was postponed.

PS: I understand why there are 10m cable to connect the computer!