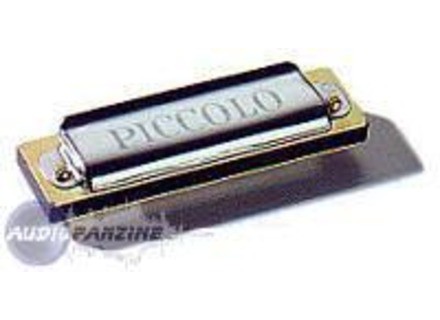 Froggy's review (This content has been automatically translated from French)

Hohner Piccolo
3
It is a kind of mini harmonica while o is smaller. The reeds, holes ...
it is discreet and convenient because it can take five or six copies without too much bother.

It's actually a MODEL Reduces Marine Band, the diffrence that covers the Piccolo are held by screws instead of nails.

It is an agreement ocatve above the Standard Marine Band.

However, I use little or no because of its small size. And other manufacturers (Weltmeister) suggest the tone of Piccolo on harmonicas of "normal" size without supplment price.

For example, a Weltmeister Blackbird is available in the following tones:

Dominique Perruchon's review (This content has been automatically translated from French)

Hohner Piccolo
3
It is primarily a collector's object, a curiosities. But you can rev well and use it happily for a double effecu first recording with a standard diatonic accordion. This is something that gives you color and your productions Ingala PCHE (but do not rptez is something pro ....)
Did you find this review helpful?yesno
»

il_tizzone's review (This content has been automatically translated from French)

Hohner Piccolo
5
The Piccolo is basically a Marineband in 8/10th scale model, I have two copies, one is the one my grandfather gave me when I was a kid, I still have the cardboard box red. Both are in C, there are other tones but I've never seen the shelves anywhere.

The small size is designed for children, with a little more security issue since 2 screws advantageously replace the nails Marineband.

The top cover gets the inscription "PICCOLO" while the bottom contains the same stamps distinctions of MarineBand.

The sound is a bit different from MarineBand, wooded course, also typed Blues, perhaps richer midrange and bass, all at a much lower volume than its larger counterpart. The attack is soft, easy alterations, only requires a small effort to play puck, but the matter of a few moments to get used to.

The Piccolo is it a harmonica actually usable, is it a pleasure exotic harmonica philanthropist? Is it a toy? To this last question my own answer without hesitation that they prefer the real Marineband!
Did you find this review helpful?yesno
»