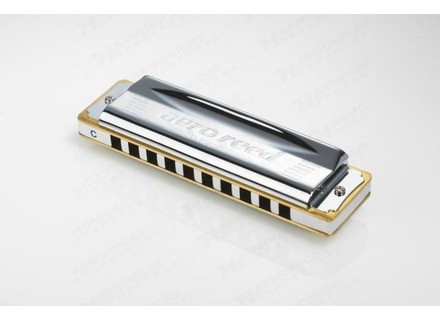 The harmonica comes in a gray plastic box, transparent, hard enough to open and which in addition is too large for the instrument. Good! is not the most important, however, considering the price it is reasonable to expect something more suitable.

The Aero has a reed bed chromed aluminum the most beautiful effect, it sparkles!

&nbsp; The plates are thick enough, ie 1.1 mm instead of 0.9 mm which is standard on most other harmonicas. The goal is to give a louder sound. They are fixed by screws 7, 3 rear and 2 on each side, Tombo might be able to add one to the front I think.&nbsp;

Chrome covers are widely open and raised in the back to get a better sound projection.

Manufacturing is really good and the harmonica is rather strong. The impression is that Tombo really wanted to make a harmonious power.

Skiing is excellent, over the Aero appears thin reed in the mouth.

Compared to other s HarmoS must blow / suck a little harder than usual, probably because of the thickness of the plates, it does not mean it's hard to play a harmonica, on the contrary, because the strips are flexible enough, but it is an element that must be considered for purchase. Otherwise the Aero reed proves responsive, much more than other models in the Tombo I've tried (Folk Blues, Lee Oskar and Ultimo).

The sound is pleasant and it is recognized that some of Lee Oskar but less metal in the end it turns warm enough in all even for a metal bed frame.

I think the strips are the same as other models of the brand, therefore flexible enough to play and alter.

Eventually the airport is a good reed harp, one of the best models I find Tombo but it will not taste of everyone. Harmonica without a big flaw is found or the characteristics of a Lee Oskar but significantly improved in many ways.