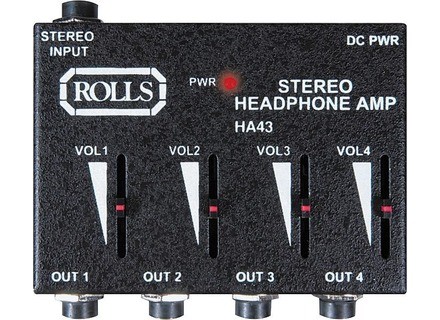 All user reviews for the Rolls HA43

Rolls HA43
4
The Rolls HA43 is a 4 channel headphone splitter that allows the user to use four headphones simultaneously out of a single headphone jack. Each of the four listeners have independent volume control for their mix, but no other way of changing the mix in the headphones. The HA43 is connected to the output of your mixer using a stereo 1/4” to 1/4” male-male cable. It is a very basic system, but the HA43 is rugged. I've dropped it several times, but it always has run just fine and produces a good, clean sound. The volume pots have never gone dirty on me either, and it has not presented me with any crackling or static.

I have used this in the studio, as when I record a band I will generally record the band live as much as possible. This usually involves the band being in one room with the drums, with direct bass and effects equipment recording the guitars directly to avoid any bleed. The mix is set to the drummer's content, and everyone else uses that mix in order to hear themselves. Of course, each band member can set his or own volume independently. Because the unit is so small, I generally set the volume for each band members in the control room myself and use long headphone extension cables for the band members.

In the six or so years I have owned this headphone splitter/amplifier I have not had any complaints. I will likely keep using it until I either run it into the ground or I replace it with something fancier. But, as I do not record a lot of bands anymore, it will likely keep its place in my studio rig for a long time. I would recommend it for a home studio enthusiast who needs to split the mixer/headphone signal up between a few different recording artists.
Did you find this review helpful?yesno

Snapboy's review (This content has been automatically translated from French)

- What is so special that you like most and least?
Very resistant metal case!
Stereo sound not breathing very well for use in homestudio
Did you find this review helpful?yesno
Cookies help us improve performance, enhance user experience and deliver our services. By using our services, you agree to our use of cookies. Find out more.