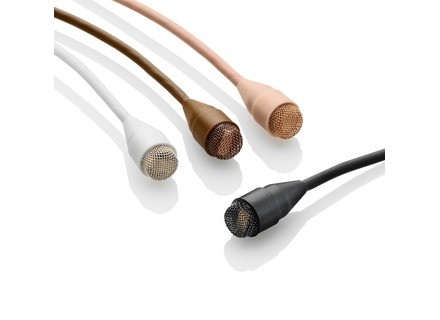 Buy this productView price information >
View other reviews for this product:
It is a miniature Electret microphone, DPA said pr-polaris which means the same thing. The head is attached to the cable, also very end and provided with a miniature jack that plugs into a standard XLR adapter. Sensibilt = 20 mV / PA: yes, it is not because we are small, we should not have the same level as big! Compared to 4061, its sensitivity is 3 times leve o acoustic saturation level 10 dB below 134 dB, but the maximum level for a 1% harmonic distortion is infrieure ms 123 dB. I read on an Internet forum that the DPA had dvelopp 4061 to record the sound of the inside NASCAR cars. For zic, so it would be better to take the 4060, the noise level is 3 dB below 23 dBA. I do not know why DPA provides a number between SECOND parenthses for this level: max. 26 dBA. Manufacturing tolerance? This level rather lev noise compared those of conventional capacitors microphones (+10 dB approximately) remains below the ambient noise in the room where I record my piano. The answer curve frquence flat 20 Hz up to 5 kHz (+ 1 dB), climbs up to 15 kHz + 3dB and stretches up to 20 kHz (0 dB). This is the answer called 'soft boost). You can replace the grid (with fairy fingers?) By a grid 'high boost' which gives a bump 10 dB 12 kHz. I do not have this optional grid that is not part of the SMK 4060, a kit comprising two stro 4060 and various accessories including magntiques turntables that are used to position the microphones on the cast iron frame of a piano.La mounting the microphone on the platinum is in the cable coinant proximity of the head in a notch of the plate. The head is so lightweight that thus it stands alone at the end of the cable. But it's a bit of tinkering.
DPA recommend this mic for 'close miking' of acoustic instruments, the piano in particular. I also use magntiques turntables to put microphones on conventional mtalliques feet the outside of the piano.

I use it for two days. Mounts on the frame of the piano as prconise CCA leaflet (see website DPA), low standards are ... With the equalizer and some rverbration, I get a very good sound, surprising for such small beasts. But I prefer the resulting sound without equalizer from the outside, the immediate vicinity of the piano. I mount a Avenson ST0-2 and DPA 4060 on the same footing and each branch on one channel of my Pramp DAVE. It has the same timbre without coloration, but the DPA surcrot a sensible definition of notes on attacks: the effect of 'soft boost? The flat Avenson 20 Hz 20 kHz gives the impression compared to round transients.
The sound quality of the report on prices parat very good to me. The sound is dfini and less color than with Oktava MK-012 (darker) or Rode NT5 (brightest). I have ever tried to CMC6-MK2S Schoeps MK21 and CMC6-and I would not be astonished that the DPA are very close.
But we must require miniature microphones for discreet mounting the instrument because they are much less convenient to use up as conventional microphones (apparent fragility end cable attached to the microphone, not prvus to be mounted s on feet).
See the source
Did you find this review helpful?yesno
Cookies help us improve performance, enhance user experience and deliver our services. By using our services, you agree to our use of cookies. Find out more.