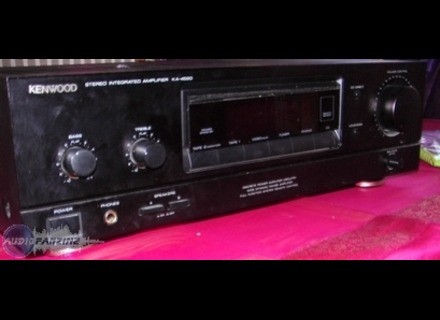 litho's review (This content has been automatically translated from French)

Kenwood KA-4520
4
In short, it's my amp head.
Bought used, it had a sunburn on the front during the heat wave, the cover of the display s'tait fraud and the infrared sensor saw only 50 cm.
Sensor is glued chang cache of nine the tlcommande walk 10m, prsentation is the class with display light blue (should change the photo site that does not make the Aesthetics of the unit).
Cot audio is a bomb, you can hang all types of speakers. Adjustable 4 or 8 ohms per switch, the power is to go. Manufacturer provides 110 W, it can return algrement 150W. The transformer is impressive (the weight too). The Tagus discrete output takes the expertise of the brand with Darligton power in boxes specially made for Kenwood standards.
Multiple entries Tape, Video, Phono, CD, Tuner tlcommandes, motorized analog volume by tlcommande, mute, balance, bass, treble, CD direct, loudness. Twice Speakers A and B commands in indpendament faade, trs useful to operate the headphones.
At the rear, 3.5 jacks for chaining tlcommande hardware compatible with other standard XS.

I bought it for tinkering because I am rather Hi-Fi speaker 15w Class A and high yield.
Sduit for your exact I have hooked the B & O boomers with Sears for rendering excellent in a small pice.
I could try it on a solid JBL rclament that power with good rsultats trs.

Likes:
The quality of the Tagus output, with an iron hand (over 110W) in a velvet glove. I draw more than 10W in a small pice with a quality irrprochable.
Design and blue display
Chaining tlcommande that drives my turntable directly Kenwood

I do not like:
Chaining tlcommande not to the same standard as my Kenwood CD player.
The aging of the infrared sensor (this is my second Kenwood amp with the same problem). Should be a bit handy to change it.
The appearance of the buttons on a plastic faade mtal superb.

The device when you buy dja speakers. No problem coping with any type of speaker.

khaymann's review (This content has been automatically translated from French)

I also bought used, with a small scratch on the screen, a friend who used it for 2 years.
I have 11 years now, and no worries (or almost, see forum)
I love the XS system popular with Kenwood has the time and I had bought the K7 player and CD player (PD 3040) which used the same standard as a result, while I was flying my remote control receiver .
The K7 died very quickly (under 2 years of life) and the rest is still there, though clinging to his cabinet after four moves!

At the time I bought it, it was a bit of history to deal with sound, and is regularly used for parties ... I have never regretted my choice of purchase!
The design is very sober and very functional.
Audio inputs are numerous, and he knew s'addapter for me when I connected to my TV and my DVD ... I use it in amp room now!
In addition, the possible switch of speakers (4 or 8 ARO) makes it a partner of choice!

Audio side, excellent power, especially given his advanced age now, the metal that is sometimes criticized for Kenwood (or perhaps these speakers) is not present (I have the speakers above Pioneers)
Likes:
The simple design
The compatibility of the remote control thanks to XS
The power of the thing that will break a window if you fall asleep on the remote

I do not like:
The appearance of plastic buttons, this litho is right!
Tape 2 button misplaced and unnecessary in my opinion ...
So for me, excellent price / quality ratio, I would do the choice to purchase their eyes closed!