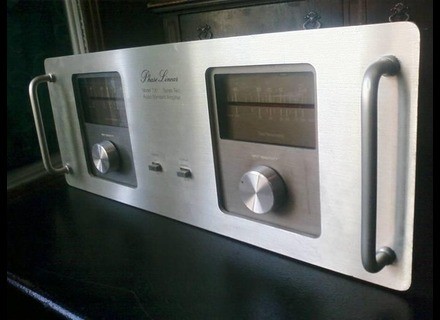 Phase Linear model 700 serie 2
5
I had a Phase Linear 700 Series 2.
This simple electronic assembly semi-complementary in 1978.
He succeeds model 700b.
It's a solid amp but like all stage it does not support light loads.
This series was developed by AP Van Meter after the departure of Bob Carver.
Are lacking, no protection dc.
Otherwise, great fishing, 2 x 350 WRMS into 8 ohms.
1.2 KVA transformer and 2 x 10000uF are filtering in for many.
On output, 24 power transistor 12 by Canal, it grows.
To listen on the real HP, Altec or JBL kind of time (not now, I insist!).
Nothing to do with the so-called brol amplifiers sold today.
Real watts with a ridiculous amount of distortion.
Seen the LEDs, the red dot that moves give him a look wonderful and impressive.
If you want quality, you have to pay the price! 30 years later, it still works.