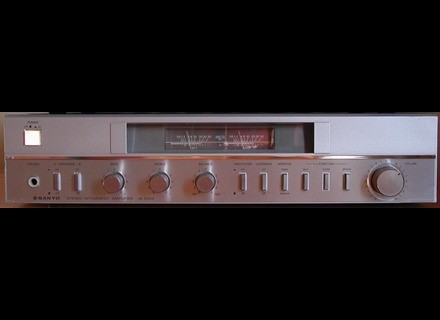 Pucelle_Dabidjan's review (This content has been automatically translated from French)" Sanyo, it has done a great"

Sanyo JA 2003
3
I know Sanyo well. I have often, in my youth, hear filthy dung produced by this manufacturer. And yet, when, during a visit to a center of Catholic fundamentalists, I stumbled upon this Sanyo, I was aware that it should not be something any.

Already, the machine is too metal for that. We feel that the volume knob metal (hinhinhin luxman L-505 ... you see? Has it that may) is mounted on a serious axis. Small VU meters are "nostalgic" nowadays, but completely from the time of creation of this machine (which should well have 20-30 pegs). All on a stable metal surface, which is golden in the photo, but that is color aluminum / steel.

Like many Japanese stuff, there are a few settings to act on his "Bass and Treble" and a balance potentiometer and switches hp (all in addition to the traditional source selectors). It's been a rather full thing. I regret the lack of phono preamp board. Congratulation for small volume knob, which has a smooth stroke and is calibrated over the entire race.

During this test, the speakers connected to Sanyo SX35 square and ugly, what is more, far too small to absorb the large volumes. I had a final result not bad at all. Able to compete with the current fi-leaf doors 400-800 euros. It was not monstrous performance, but the voices were right, y'avait a warm base sweating the good old analog reproductions, the instruments were transcribed with quite a lot of detail and rind without cheat on complicated messages. The lower back slightly. Overall, a very small tendency to soften at all frequencies of the message has been noticed. After the placement of artists could be better, there was a sound that stands out a little bit of HP's (here and there a detail is sent flying), a good transcript of grades. It really was not bad.

Frankly, I am pissed to say whether it was possible to hear better with other Hp's. I think so, but it will not take you eager current monsters. The amp sounds pretty greedy to want to distribute (wholesale conditional + quotes + big assumption not proven by comparative tests). I base this on the fact that bullshit, half volume, it seemed to me that the amp began to falter. In practice, it is, in this volume, on the edge of war with neighbors.

So that's an opinion a little less well done on my part, but should inform few. I do not consider this as a beast Sanyo vintage racing, but it démerde honorably and can be a good first amp for those who do not seek a violent thing to high volume levels. He, at least, some skills reproduction.