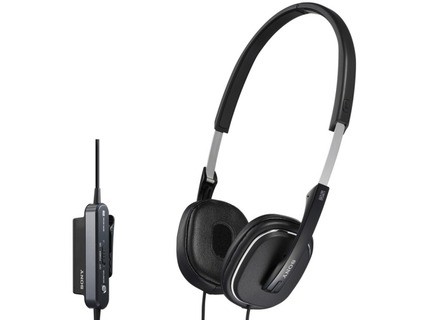 Sony MDR-NC40
3
These are a pair of noise-canceling headphones from Sony. With the power of one AAA battery, they can cancel ambient noise. The way they do this is with a tiny microphone on the outside of the headphones, which records the sounds that are heard, and then plays them back at a 180 degree angle, which effectively cancels the noise out due to phasing. This really only works with noises that are constant, such as wind, traffic, airplane turbines, and fans/AC. A car horn isn't going to get canceled out, for instance.
When these headphones have the noise canceling turned on, they sound pretty great. They have a pretty solid bass response for headphones of their size, a response that I was very impressed with. The frequencies are well-rounded. However, when the headphones run out of battery power, which can be often if you aren't careful, they don't sound nearly as good. In fact, they are pretty weak at that point. Definitely make it a point to always have the batteries in and as fresh as possible. This can eventually rack up quite an expense in terms of batteries.
They are not really ideal for studio use, as they aren't exactly equipped to handle the unmastered, rough tracks that come through a DAW. They also aren't capable of providing isolation when there's other instruments going on, so they really aren't that effective in this capacity.
The biggest complaint I've had with these headphones is that they break easily. They have a cool collapsible structure that makes them fit in small places, unfortunately the plastic isn't hard enough to withstand much pressure at all. Be very careful with them or you'll regret it.
While these are a decent price, and do sound good when everything is going swimmingly, there's a lot of problems with them. Enjoy at your own risk.
Did you find this review helpful?yesno
»