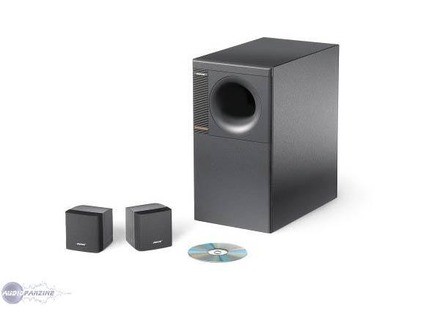 lgdas's review (This content has been automatically translated from French)

Bose Acoustimass 3 Serie III
4
APRS utlisation two months, it is still thundering Systm: I can not believe that the fate of these little things (the satellites are really, really small).
The subwoofer is good: it does not get any as Submitted Obviously done everything, and we can rgler the bass simply by positioning the chamber Different.
The main quality of this Systm is large enough in its neutrality. A little hollow in mdiums, sr good, but no effect of U qualisation flateuses as some speakers. C'tait what I wanted: something that is close to the monitor speakers while remaining speakers of living ... and small to have room.
This quality is also a default: trs is flat!
Moreover, without being an authorized specialist in I feel the subwoofer eats a lot of power, and I have rgler my amp with my speakers louder Previous yet The same impdance.

Question qualitprix ... it means. We pay a clear design and brand, not acoustics.

I cost a lot of speakers before buying them, including monitoring.
I have especially comparing Boses classic (201 and 301). The 201 is really rather weak: good for a small room, not a salon. The 301 is pretty cool, fairly low / high, but all the same qulibres. I would have taken if the wind did not t the bass reflex rear, forcing the position at least 50 cm from a wall, under penalty of spray acoustics.
The Acoustimass finally another advantage: it is well Dfine (compare Systm of the same range), and the Stereo is very well made even when hair cell is not between the two satellites (they are not directional, which should also contribute to the sense of lower performance).

Other things also galls (budget and place), then I would do the same choice.
With another budget and fewer children home ... not say it!

Oh yes by the way, is a nice thing: taking the hide of the prcaution caison low, the head of friends who believe that the sound comes out as the two satellites ... it's pretty fun

vass's review (This content has been automatically translated from French)" No"

Bose Acoustimass 3 Serie III
1
This system is actually a m. ...
That invade a serious drag. A broadband sucks for all the medium acute.
Unworthy and expensive.

centurygold's review (This content has been automatically translated from French)

Bose Acoustimass 3 Serie III
1
Brand Franaise 3A disappeared long time ago proposed a system whose performance triphonic subwoofer shaped coffee table was enslaved to correct the defects and thus had his amplifier. the two satellites were real mdium pregnant with a fever and everything worked great. these systems when a Boses them are copies of blades. Listened to store several times in all versions to see developments in the presence of some vendors provide a feeling very convincing home cinema as a fashion with which characterize this type of product bass heavy and poorly controlled the absence of low-medium, the mediums and treble clicking projects and artificial: the agreement hps mduim acute cone too small in a small plastic box as well as cheap subwoofer with amplifier in a small aglomr cube covered with vinyl at the exorbitant prices of small bookshelf and columns whose quality interssant best example is the series of ancient chorus JMlab up a recement because not listened to by my care ...! !
the 301 series are two of the same manufacturer when it was much more convincing and more music and create an image without sound quite impressive agressivit good size woofer and two mduims acute type of paper enclosed small fee of F we are not clever foreign to the result. It is compact in the presence of a well-accomplished even as on the classic they defend well .....
this kind of forum is irrelevant if no music is that to be useful cinma home with movies "destroying cars" or they seem impressional audience (demo classic salesman motivates the customer to purchase the !) "No but that is a sense of dja seen and heard and it is selling very well thus c design is especially so as they say.
the laws of physics being unavoidable and it is technically impossible to pass the work of a mouse to that of a lphant especially for the speakers.
So I will give a score of 1 for agreement with the WAF lon .... that can accommodate them easily but c is.
CJR