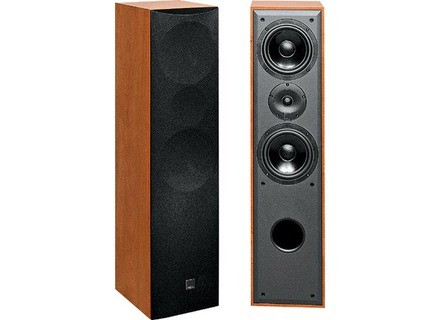 Dali Edition Blue 5005
4
I bought this place during my military service in 2001. Taking advantage of the proximity of multiple stores in order to compare stereo.

The chamber was located in the middle of a Blue recounted that six models. His trademark was the low and midrange HP were arranged around the tweeter, a process also called for Appolito. This enabled him to Sort this out with only two HP's lower midrange where colleagues had in 6006 and 8008 3.

To cite other specifics, saying that before the felt is removable, the speaker is plated with a photoflamme alder top trend in early 2000 but very sensitive to shocks. I insist on it, is the major weakness of the speaker. She does not like scratching or shock caused by your hysterical girlfriend who destroyed the apartment. In fact, avoid hysterical partners who can not talk and throw the dishes. Otherwise, I might add that the terminals are gold plated and the speaker supports bi-wiring. The manual is simply fact, but explains how quickly it may well put its enclosure and explains the specifics related to running.

Being in search of my sound, I had made a comparison with the whole program Dali, with Rowen, the JBL and media mogul I had in the corner and this place was my favorite for several reasons:

- Very good dynamic rendering
- Astounding level of detail while emphasizing the overall sound
- High overall heat
- Natural sounding, especially on the instrumental music or it gives texture to the percussion, guitars and basses
- Clear highs, and defined
- Very place for records rock, pop, soul, idm, jazz, metal, world music
In short, I had everything we needed for a good speaker. Price of 1200 CHF was not given, but I was for every penny. I want to say something, this place was behaving much better than its counterparts, the largest, the program Dali. Looking on the technical details, I note that the adjustment of internal crossover was slightly different on this model, for reasons unknown. But it must be a key factor. I guess this supports the hp low and medium frequencies in which they enjoy more and suddenly the sound of it all sees greatly increased.

Over time, I also noticed that the line frequency is not totally flat. I found the bass a little enhanced, no effect of loudness and treble a little more punctuated.

Anyone looking for a forum style that I mentioned above can not be happier with it.

In the first part of his life. I combined with a set NAD (see my review). I can particularly recommend this combination, natural, playful and warm. For some time, I also played with a stereo tube amp brand twinsound which itself is plugged into a Sota turntable. The Dali does not flinch and shows once again fully up to eat the dynamic sounds of this combination.

Before closing, let even the size of IEEP. The dali did not need a huge room. But know that as you remove them, the more you'll have a very wide stage. The ideal being 4 to 7m. She just needs a little space between it and the wall or furniture. Allow about 20-30 cm in each direction to do well. And small tip, place each speaker in the corner of plièce, and point the speaker for the back of it is the latter. You'll need a subwoofer, I guarantee you.