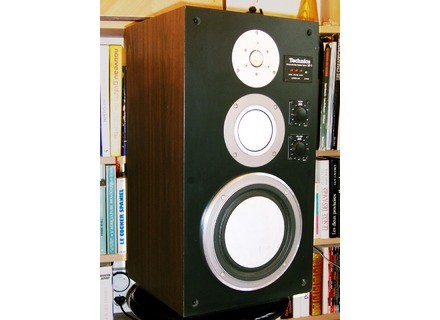 These speakers are very powerful, again, I think the boomer has suffered with his former owner. He "slap" on the stroke of bass drum, mounting a little power. These speakers initially shocked by the design of loudspeakers. Technics opt for flat membranes. This is infact of DMES normal, covered by a layer of cardboard honeycomb. The HP is very serious and has a steep low Xmax.

Are the medium rather impressive clarity: the rigidity of the speaker really hit very smooth, we do not have a very sweet sound, but by his captivating clarity.

<span style="text-decoration: underline;">Compared with pregnant Fisher (of the same era):</span> Low relflex, 125W in the stick ...
If there are less low, they have the deserves to be very clean and well-gal whatever the frequencies. The medium rather are much clearer on the technics, and I felt better stereo.

To conclude: the speakers for love, which does not sound dlivre enough to dance the crowd (even small, they will explode in less than two), but gives great feel on the precision of each instrument with a pure sound.

Also: There is a break security on each speaker. This means that a speaker can be cut if too high peak, it is necessary in this case the FS by pressing the button on the front (3 ptits red button top right). I have never had problem (as low too sensitive to push too hard, I do not want to damage them further)

Also 2: rglages buttons (one for the medium rather, one for treble) can match the sound environment of the chamber. If for example they are in front of a curtain and a wooden box, one can climb a bit sharp, (up 2). On the contrary, if too much reverberation, we can fall (until -8: in this case, the HP is totally shot.

I think I have any say.