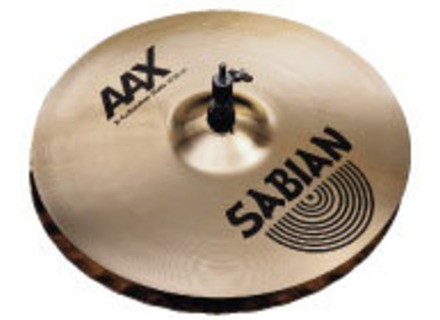 AAX X-Celerator Hats 14", Hi-Hat from Sabian in the AAX series.

All user reviews for the Sabian AAX X-Celerator Hats 14"

bobby_steeve's review (This content has been automatically translated from French)

Sabian AAX X-Celerator Hats 14"
Dception ....
That's the word for this charley
Me I like a slick accurate. clear closure, an opening and a nice shiny power Gnrale.
ok to be powerful is powerful. I complained I did not hardcore. But the sound is lousy. the lack of slick nervousness cymbals do not go together, the closure is approximate, opening lacks punch. I hates brief.

Sabian AAX X-Celerator Hats 14"
4
Charley used for 4 years in our local, live and in studio. Trs precision sound good with a grain too open, a sharp attack and a vibration mlodieuse without being too baggy. Lends itself well every style from jazz to mtal but, as always, a matter of taste. We rincarnation Dave Grohl on drums and the hi-hat survcu him. So EXCELLENT Resistors. A little behind in terms of projection and power, but nothing that can not balance the r-rgy. Good service APRS international sales (good for turners).

Max Gyver's review (This content has been automatically translated from French)

It's been almost 2 months
- What is the particular feature you like best and least?

The sound is more powerful than most other hi-hats (zildjan, paiste), is equally suitable for rock, blues, jazz and metal. The bearing are very easy (tt a little less bounce than a paiste 2002, but the sound is much more powerful)

Well, I had the medina, shit, pack in 100 euros on a notice (limp).
I play a Paiste Alpha 13 "I think (not mine, another Mömbris my group) who also had this system for bottom with wavy but not convincing trs.
At the shop, I tested a zildjan ZHT 14 "I think I found carrment a shit because it did not leave her, and she came out was still slightly worse than on my medina.J 'I also try the Paiste 2002 14 "trs conveincante to the touch, but a little too clean for my taste, lacking a few sound is aggressivit prcis but weak, but for the price, although it slightly be prcis eh.

Well, as with all it's expensive, but hey, I think she wants every penny, compared to its competitors.

With experience yes, but if j'aivais more money is on that I might be directed towards HandHammerd, Meinl or high range, but with the same budget, I would do the same choice.
View price information
Did you find this review helpful?yesno

Sabian AAX X-Celerator Hats 14"
5
Charley Polivalente even very pretty!
He has a good chick sound and semi-open did not cover the entire surface!
I highly recommend it!

joethefly's review (This content has been automatically translated from French)

Sabian AAX X-Celerator Hats 14"
5
C is a real monster
it sounds much
there are specific closed and it takes a lot of power open. chick at the foot of the precise cymbal a corrugated bottom. reserv to rock and powerful music.
View price information
Did you find this review helpful?yesno
Cookies help us improve performance, enhance user experience and deliver our services. By using our services, you agree to our use of cookies. Find out more.