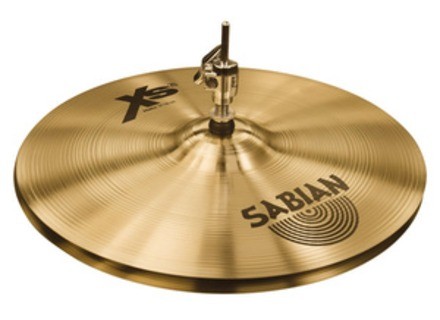 Sabian Xs20 Regular Hats 14"
5
This charley followed me for three years of drumming in a group as in single player. This is a great charley, very versatile, I used it when I started playing in groups as well as for larger concerts, and many repeats.

I used this with my hihat Pearl Export EX in early with other Cymbals XS20 Series (Medium crash 14 and 16 "Medium Ride 20") and then with 3 AAX crash (crash Metal crash and Stage 16 "and 16 O-Zone"), an HH Duo Ride 20 "XS20 ride and I still use a Chinese HHX 18" splash Zildjian and 2 (A and K custom custom hybrid).
I also tested this with my charley parallel current, the AAX Xcelerator. The latter having a rather dug in their mediums, they complemented each other very well.

With regard to the sound of the XS20, it has a rather bright tone, medium close ups - media central, giving it a very good presence. Its hard enough volume and tone make it penetrates well in a mix, be it in the game solo or in groups, it is present and be heard! In terms of sound characteristics is quite similar to a charley Series Sabian AA (AA Regular Hats ...).

Context of use can be very large, be it rock, hard rock, funk, pop, reggae, blues ... I started playing with a group of pop rock, then he followed me in a rock band more punchy, funky accents, another group focused more hard rock, and finally my last rock / alternative metal.

It is able to penetrate very well into the rhythms pop / rock / hard rock or pêchus calmer, but it can also support much heavier and more rhythmic metal. To play funky / fusion is really nice especially at the fast sixteenth-note patterns or sextuplet, and it also highlights the game with ghost notes on the snare drum. During the opening sound is clear and precise, and involved semi open it can provide a more powerful and heavy. Closed set in clarity and precision will be obtained and a very good volume.

At solidity and reliability, Sabian has really strong, like most of these other series also. If you take care in placing him in a flycase adapted by cleaning from time to time, aging is very limited, as the alteration of his (do not we say that Charley are like fine wine, they improve with time: P).

Small problem regarding the extreme music genre thrash, death ... It is not really made for but has limits the versatility and happily!

I now play in a group of thrash metal and I decided to change my AAX Xcelerator, more suited for my current game and with a stronger personality.

In conclusion, I find that with Sabian XS20 series has managed to put the versatility and quality at fair prices for farmers with cymbals really nice sound quality. Charley This is a strong point of this series, and can as I said above support a drummer for a long time and grow with it!

Tomakzub's review (This content has been automatically translated from French)

Sabian Xs20 Regular Hats 14"
4
This will be one week that I possde, I have waited before making my choice of a non-standard budget and not wanting to finish with a charley "shit", I took my time, I test diffrent charley in the same range (ZKT titanium and other ...), I finally be happy with this little charley.Il trs is accurate, and sounds great, it its a pretty clear, but both gross, ideal for playing in the registry rock / metal. APRS is good but I got a charley and has chosen not to internet with a comment, you must listen sounds and be captivated. Voil it gives you a little advice
Did you find this review helpful?yesno
»