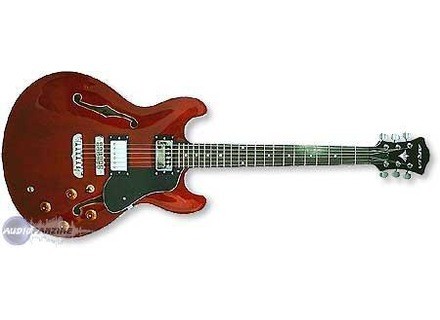 Body it too light! Nech tried to dive to the floor every time you let go, neck slightly bent, more likely a result of age and abuse then design.

A excellent guitar for the pricfe, but will definately be buying a *real* guitar sometime soon


The lightest bass I have ever played, comfortable styling, and a punchy sound.


Yellow fade in the white finish, thin paint used chips easily, nothing else....


This bass is strongly constructed, and seems to have a wooden core coated in fiberglass, which still has a nice unique tone. Typical 4 bolt-on neck, with low, fast action & a solid bridge. Mine is setup with strings BEAD (as opposed to EADG), however the intonation can be set very accurately - resulting in a sweet sounding bass, wherever you play on the neck....


I did not intend on purchasing a bass when I bought this, however the $100 one-only special was impossible to miss out on. I could have paid up to around $600 for this bass & still be impressed by it's weight & extreme playability.

Just like Aria Pro guitars, their basses can stand up to a range of playing styles, however I'd say it is best suited to slap/percussive players who believe a good beat is just as important than a good melody.

Oli_34160's review (This content has been automatically translated from French)" Great guitar ... after a few mods."

Aria Pro II TA-65
4
Mine was (according to its serial number) one of the first to be manufactured in Korea in February / March 1989 (908xxxx). It is an imitation of ES335 (to answer questions on the rack ...). Natural wood with a varnish of good quality. Channel 22 frets with rosewood keys. Gibson classic configuration: 2 double with a selection switch mixer and microphones and 2 volume / 2 tones. Microphones hung quite original (feedback) at high volume levels and saturation. I have exchanged against GFS Vintage 59 ... And it tjs whistles, but a little less early! I think it is inherent in the quarter cash ... That said, in its ordinary use (Blues and Jazz), there is no pb. I also redo the electronics because the knobs "cracked". I took the opportunity to redo it a facelift with quality products (CTS knobs, Orange Drop capas, jack and microphone Switchcraft selector, push-pull on the splitter tones for the microphones). I also changed the mechanical Grover (y needed for the mechanical precision were desperately Aria).
So I put 6 in relation to the hardware and electronics approximate origin. I would note higher with the upgrade it has suffered. But it would be dishonest ...

Its gameplay is its strong point. The handle is very nice. the guitar is well balanced and light. She has a very good sound empty. The original pickups were a little deaf. the balance between the two is a bit unbalanced (neck pickup bcp stronger) and you have to play on the height of the microphones to "compensate" ...

This is a guitar oriented enough (Blues and Jazz) with his greasy, I made a little more versatile by integrating the split pickups. In this directory, it is perfect regardless of the amp.

I note 7 to the lack of versatility (subjective opinion). But she deserves 9 if it is assessed only in its "scope."

I have since 1994. But I neglected pdt quite some time. This is currently the one I play the most (I have a lag Rockline Toulouse elsewhere). I mounted Elixir in 13/56 (hard enough to Jazz and Blues). It is very shortly after adjusting the neck and chgt mechanics. I have not tried other guitars of the same type as originally it was not my choice (it's a gift). But now, after upgrade, I have no desire to part (except for ES335 if someone wants me as a gift - you never know!). Maybe I'll try to replace the bridge pickup to increase its versatility and power make up the difference with the neck pickup with a humbucker (Seymour kind JBH) ... To be continued.