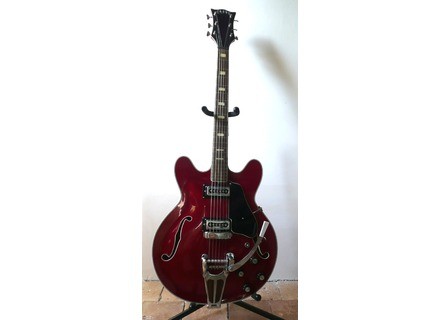 All user reviews for the Crucianelli Elite

po : go's review (This content has been automatically translated from French)" I'm a fan! ! !"

Crucianelli Elite
5
This is an Italian guitar. Mine was imported and distributed at the time by the store Paul Beuscher Bd Beaumarchais in Paris, which was also in the import of Japanese and American. It must date from 1970 following the advice of Jack Marchal, leading expert Fetishguitar.com: thank you to him. It is therefore no marks apart from the inner label "Paul Beuscher." The bridge is a kind of vintage Bigsby. It has 23 frets. Two single coil pickups Crucianelli, two volume pots, two tone and selector pickups three positions (neck, bridge, both).

The handle is cool. It is light, it is a copy Gibson ES 335 as there were thousands all over the world! taking but enjoyable as standing than sitting.

It is quite suitable to my style of music, rock'n'roll sound / blues, very organic, great "vintage" as I wanted. The clean sound is good and the crunch too. I love this guitar, in the style of PJ Harvey Nirvana through The Cramps, it is very comfortable, it's still a fairly wide pallete, right?. I play a Fender Mustang 1 and frankly, I get exactly what I want.

I use it for 2 years, this is my first electric guitar and forty eight years, it's never too late to have fun! I tried a ton of scrapes with the guys and frankly, this one is for me. Just to make sure, I did it to test several buddies musicos scratch and savvy, they all remained speechless: it has the resource old!
I love the sound and look as his cherry red Gibson copy. I wish I had an old Gretsch, but there was not quite the same rate if you know what I mean ...
What I like least is that with a fuzz or distortion, the noise are hellish, but with a set to the Mustang or my Line 6 DM4 gate, I can get in out, but what do you want, a guitar of this age (almost mine) with this kind of microphones, do not believe in Santa Claus! That said, it's a noisy kind that can please even the most radical of us ...
Its kind of Bigsby is a stew unnamed totally prohibited unless you want to play from the first false vibrato ... super cheap lift is crying, but the latter will be subject to change, because it is impossible to hold given more than an hour playing.
It sounds killing for what I did, but for the virtuoso players at Santana, Pink Floyd and other Hard Rock FM, I think we absolutely have to look elsewhere! for my part, j'm'en tape, I'm an old punk rocker, then all that stuff, it's not the style of the house.
I would do without hesitation that choice, it's roots and that's exactly what I was looking for.