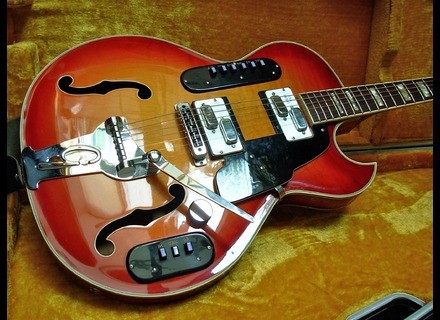 bergheaudphone's review (This content has been automatically translated from French)"Excellent guitars from the 60&#39;s"

Goya Rangemaster 107-S
5
To continue the presentation of different models of the Goya Rangemaster guitars Hollow Body here complement the information already given in the two comparative tables published in the media section. They detail more precisely the commonalities and differences between two guitars Goya Rangemaster 107 and 109-2 (2 models I own).
Read also documented Montaigne subjects who described the Goya Quadrant Control (109-2) and Rangemaster 109 model.
For a more comprehensive vision of the series also refer to different opinions on models etc. 107-109-1092. referring also to photos and media on these guitars as well as discussions on the forum.

Quick overview of the series:
Goya # 105 is the entry level model of the Rangemaster Hollow Body series. Unlike other models the box, lined a single binding, has a pan Venetian cut. The bridge is rosewood. Head without binding, does not show the characteristic guitarist of the series is an overlay substitutes. Pins are the key points instead of rectangles.
These differences visually distinguishes the 105 other models.

All these models above, are equipped with pushbuttons as a selector pickups and tone controls. To make room for plates supporting these buttons gills are shifted further down the table at the tailpiece.

Unlike other models Goya Quadrant Control (No. 109-2), presented as the high end of the series is equipped with selector 3 positions. It is an evolution of the model 109.
The gain obtained by the break up of 3 selectors instead of the 9 buttons on the 109 allows the gills are centered with respect to the bridge.

The sleeves are screwed standards in the Rangemaster Hollow Body Series (photos) with a rod (truss rod). They are thin, straight and very enjoyable to play.

The bridge is the "Tune-O-Matic" type roller. Roper-vibrato is "Bigsby" type, it is not very effective (see reviews). This vibrato (here on 107S and 1092-B) is a Deluxe version. Found most often on the Goya-vibrato tailpiece with tremolo removable.

For electronics:
4 with half splitables microphones 107 which allows the five combinations (by push buttons) while in the supply 9 109-2 by selectors. These microphones rarely marked "U.S. Patent". This is the case here in the N ° 107S
3 possibilities of sound corrections Low-medium-high (buttons or switches) are identical for both models.
A general volume on / off on off on a 109 or 107 button.

These 2 guitars each have their own personality. The sound is really quality. In both cases the clear sounds remarkable, are more appropriate than the distorted sounds.
Personal opinion: the Quadrant accurate and mellow, more detailed than the 107 where the sound is a little thicker, less "dive".
The sound differences are still quite small, and from the wood used (mahogany or maple 107 1092). Depending on the style of music played, hardware and touch guitarist will do the rest.

These guitars are very versatile, really fun to play with beautiful clear are which may (or may not) slam. Very cool also arpeggiate fingers and pick.
Soft, jazzy sounds, are very easy to obtain and very useful in a context where a jazz guitar box cling more easily Larsen.
These are guitars unfairly neglected in terms of their musical qualities, the seriousness of their fabrications. Their look, if staff can identify at first glance.
A series stopped too early and long. These are hard to find guitars, including Control Quadrant which is extremely rare on the second hand market.
A twelve string would be welcome, we can always dream ...

The bridge is good but the use of vibrato (Bigsby-type) is not terrible. This is the only point to the flow.
(Hint: a washer or a rubber gasket under the spring vibrato eliminates unwanted vibrations

The neck (20 frets) thin enough, is very enjoyable to play, law, allowing low action: the movement is easy, fast, hands "not faint." I use string Jazz flat net (drawing 012-50).
Access to acute is no problem. RAS.

The head is pretty with her character with a cape playing classical guitar (head ankles).

The coupling sleeve microphones (3 & 4) to play Jazz is very credible. Compared with guitars case the result is good quality or even higher. Position 1 & 4 we obtain a clear sound and well defined for arpeggio. For a good clear rhythmically position 2 & 3 does the job without a problem. As little "rocker" I have no opinion on the resulting sound in the bridge position (1 & 2)

I usually play a Fender (The Twin) Polytone or even on Trace Accoustic (ART 100) for the Jazz.
Otherwise Roland and Twin for more percussive sounds (with or without effects).

Goya Rangemaster 109 was my first electric guitar, bought in 1968. This guitar was really appreciated by experienced guitarists that I attended when I started as a musician. Yet all owned Fender, Gibson or Gretsch!
I later sold to finance my first guitar purchased from a luthier. I always kept the nostalgia of this instrument to look so special.
That is why I bought this 107S Rangemaster when the opportunity presented itself.
This guitar is of good design and good quality, it has nothing to envy to other similar guitars, more "prestigious" and certainly more expensive. It is truly amazing and very versatile.
I had the opportunity to have a lot of guitars, it is certainly one of those that I would keep if I had to choose.
Indeed shortly after purchase I fell for a Goya Quadrant, so ...