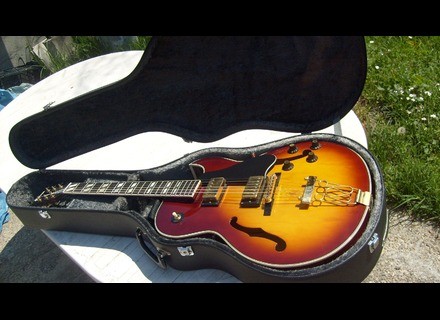 Maison FA740D
1
Made in South Korea, standard two humbucker v/v t/t setup, bridge is similar to a Gibson's, manufacturer unknown, same with the tuners and tailpiece. All solid and dependable, though.

Well, this guitar belonged to Hawaiian recording artist Sonny Kamahele before me, and someone had done some creative wiring. I thought the masking tape vs. electrical tape was a nice touch. I rewired it, replaced pickups, switch and pots. Tuners were fine, solid and worked easily. Fretwork was decent but I did level and dress them. It plays incredibly well at any point on the neck, not just for an off-brand knockoff but for a guitar, period. It's got a fat neck and really comfy fretboard. I was recording some solos with it last night and had a hard time putting it down. You can tell it's hand-made, the genuine mother-of-pearl inlays are definitely not standard, even two side by side are not exactly the same, almost nothing on the guitar seems to be standardized but the hardware. But it's fun, it looks nice and with a set of flatwound .012s on it, it's a total babe. Acoustically it sounds rich and nice. At one time I had this, an Epi Joe Pass Emperor and a '71 Gibson ES-335TD, it sounds much closer to the 335 and made the Emperor sound like one of those plastic Roy Rogers guitars. The Epi's gone now. It's not really meant to be played distorted and I don't think it sounds very good that way at all, but clean, I love the thing.

I only record these days so all my electrics go through either of these chains:

1. Mu-Tron vol/wah/preamp into either A. Tech 21 California, B. Marshall Bluesbreaker or C. Boss Fender DeLuxe pedals, then to a VHT Special 5 amp with a Sennheiser e906 mic on it, then to a Yamaha MG-16 board, from there to a MOTU 4PRE interface and into a hot-rod PC I built for my studio. If not through there, then through a Digitech Brian May pedal into the board. I have a collection of guitars so I have the luxury of using the guitar that fits the mood, but for jazz and blues done clean this is quite a good choice. The neck pickup, bridge pickup or both (generally a sound I'm not crazy about) sound great to me, and that's not true of all of my guitars.

What I like most about it is that people automatically assume it's a piece of crap because they haven't heard of the brand and it's obviously a Gibson knock-off, and a lot of those are pretty putrid. But it holds its own as a guitar, as a musical instrument. It is solid. Everything is holding up exceedingly well on it, no binding issues, inlay issues, fretboard or fret issues, no problems or cracking in the top and back. It plays as easy and smooth as any guitar I've ever played, no excessive buzzing or anything. Whoever built it over there did it with love for working in his craft. Its little cosmetic eccentricities are nothing, it feels and resonates like a very good quality instrument. And it belonged to someone who used it lovingly for years, Sonny Kamahele, who did movies, TV shows and played live until he was 82. His last set list was still taped to the upper bout when I got it, I saved that. This is an older one, I'm guessing from sometime in the '70s, the wood has aged and mellowed. It's a really good guitar.
Did you find this review helpful?yesno
»