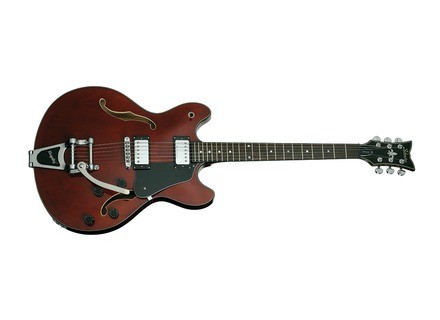 Schecter Corsair Bigsby
4
Schecter is an American brand that is making his guitars in Korea on a Ligen good quality standard. for example, Robert Smith (The Cure) played on the Corsair DIAMOND SERIES RS-1000, and as is a skyscraper built in series, if you find one, it will be exactly the same as that of the famous brown shaggy. 2 Duncan Designed HB micro-101, a sleeve, an easel. 4 knobs (treble, bass, volume of mics). 3 position switch. Channel ebony, 22 frets. Grover effective. I was a little afraid of an instrument from Asia, but we believe that Korea is not China, and I was amazed by the finishes of my model. I said that mine has no Bigsby. Bindings clean and sober, freights are not insurmountable walls, the game is neither too high nor too low. Until knobs, solid and full, whose pivot soft but firm raises the reliability. Special mention to the look of the head (it looks like a Dean), who gives a bad boy side nice and positively explodes with the sobriety of the rest. The set looks very nice, sober and blues / rock. Brown wood with a beautiful varnish over it. The guitar weighs his weight (like a Gibson ES335 from home), it is not a toy ...

Channel pleasant, close to an ES335, easy access to acute. The ergonomic design of the guitar suits me perfectly, first-because I am tall and I can play it sitting down, resting on the knees, without killing my back. Then, because its weight is balanced and provides stability. No need to quickly contortionist to pull the craft of fine riffs. After all this, I plug ...

Immediately, I am struck by this great clear sound, once again, takes me back to Gibson ES335 from home (I had one, that's why ...) and I file the banana! Perfect for blues, nickel with a small crunch, and even in arpeggio, that's fine. No difficulty to the baby crying on several blues, RHCP, or even a good old Sweet Home Alabama ... go, it goes into overdrive. Set to 8 (of 12), boosted channel allows me to start with a small Higway to Hell, just to see. Again, surprise: The Schecter has little to fear from Gibson: it sends and without much effort on my part. I go up to the max, just for fun, and Enter Sandman not sound bad at all. I go back down and balance Money for Nothing with jubilation and this observation: clear or saturated, the Corsair is the rendezvous! I plugged mine on a Peavey Classic 30 as amended. Honestly, I do not know if this is the most suitable, but it sounds serious!

I bought this guitar almost by chance, because I am separated from my Gibson ES335 Custom Shop, and I could not stay without scratching. I also was looking for 335 for a standard size and ergonomics. A scraper to cut the blues, but rock can send or strong. I almost switch for Washburn (more expensive - 500 € - manufactured in China and cons), an Epiphone Sheraton (more expensive - 500 €, too -), and have temporarily (2 days) owned a Harley Benton type 335 ( Made in China, 200 €, unplayable), and then came across this model Schecter secondhand without Bigsby, I bought 3 times cheaper (336 €) as its price (1097 €) in the few French retailers . So a guitar substitution, in which I dared not hope to find the sound quality / Gibson. And yet, hands down Schecter proves that a "small" name can lead to great things (there are still some zicos recognized that use ... except Robert Smith, it was Jeff Loomis of Nevermore). By losing prestige (we do not care a bit, actually), I won value for money, I would call even unbeatable! Finally, far from being a substitute, the Corsair is pretty much a fairly faithful replica of the Gibson and most importantly, allows its happy owners not to hurt my wallet. Strengths: Solid, amazing finishes, sound, style, balance. Weaknesses: The purists will say it is far from a Gibson, but will they really sincere? In folk, I would compare it to the Alhambra W3 I had for 1100 €, compared to Songwriter and Hummingbird (2000 €) from Gibson without the star of guitars, one is already very high in quality, and yet more value for money.