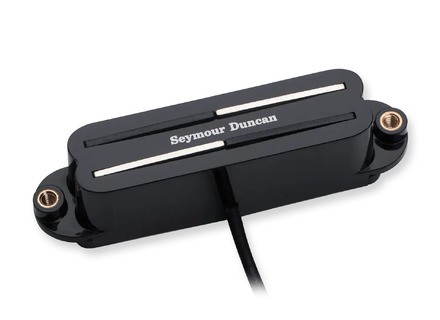 Echo tango's review (This content has been automatically translated from French)" no single coils buzz!!"

Seymour Duncan SVR-1B Vintage Rails Bridge
5
I bought two, settled in middle position and neck on my Squier Vintage Modified (after testing with a little 59 and a cool rails ... yes I know I like to tweak the config 'microphones but in the end all world not benefit you?), with a Hot rails in bridge. Initially skeptical about the level of output I had wired in series (not parallel as shown in the diagram). It then goes from about 2.5 Kohm 9KOhm, but then eyeing her closer to a humbucker sound that acronym coil. So I took my soldering iron and follow the instructions of Mr. Duncan. In the end? Ben's all in the title: no buzz, the clarity of single coils and a nice living with the Hot Rails. So here I am with a versatile and silent guitar (when I do not play

). Users are recommended to single coils in which the 50Hz damn balls ...

bara's review (This content has been automatically translated from French)

Seymour Duncan SVR-1B Vintage Rails Bridge
4
Super micro dual format simple. In fact, it is my microphone Start improved, with better bass, better-defined midrange and treble clear. The gift Bonux is silence as the output level is substantially that of a simple, a bit stronger but nothing crazy either ...

Exactly what I expect from this type of microphones ...

guigue26's review (This content has been automatically translated from French)

Seymour Duncan SVR-1B Vintage Rails Bridge
5
Well here is my story:
j I bought a Yamaha AES frank GAMBALLE signature, which is equipped with two Hot Rails in the neck position and middle.

those I did not like it was 100% due to non-existent nice clean sounds, I have decided to replace them with two vintage rail that I had tried a different brand of guitar and had subjugus m.

c is done, and my impressions are that good, clean sounds are of a bewildering beauty, and the distorted sounds are singing a greeting!

n but not buy these buggers for microphone, that s not their vocations, c is rather that the microphones in exellent clean sounds and crunchy.