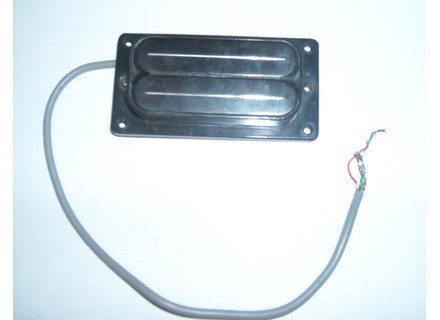 Bill Lawrence USA L-500-L
4
The L500L is very similar to the L500XL, but lower output. The XL has so much output that harmonics are almost jumping off the fretboard, making playing efforless. This isn't quite that high. It is still a pretty high output pickup, very smooth and much more balanced across the frequency spectrum compared to the very bright XL. Definitely has a vintage vibe to it, comparable to many lower gain pickups of decades before, similar to the DImarzio Super Distortion but tighter and smoother. Works great for any style, but for metal IMO the XL is better. I have both in a few guitars and I much prefer the XL, almost the same tone just much more effortless to play because of the higher output. The L500L is very smooth and vintage but still has a hifi quality to it. The highs are crystal clear and the low end is tight and present. It doesn’t have that cocked wah sound that many rail type pickups have which is great.
Like I’ve stated in the title this is for the B&B model, not the BLUSA. I don’t get into the whole B&B vs BLUSA debate, they are both great pickups designed off the same platform. There’s a youtube video out there comparing the B&B, BLUSA, and Dimebucker all in the same guitar and the differences are so small that you wouldn’t hear them unless you were listening for it. Once it’s multi tracked or in a full band mix the slight differences would be completely gone.
Don’t buy one cause it may be the one Dimebag used, he used all 3 throughout his career. I personally use B&B cause that’s what came in my Dean CFH new, I loved it and bought more from B&B so had no reason to try BLUSA. I liked what I had so no reason to change.

francoisqueinnec2's review (This content has been automatically translated from French)

Bill Lawrence USA L-500-L
5
So already ... I test the 2: Things to know the real one, made by Bill Himself, and that
United States Bill Lawrence (the original install on my Washburn N4).
BLUS is that of a very good micro, but it is sorely lacking in balance, with fairly sharp shrill ...
The Bill is much better: The very very nice midrange, treble well as it should (very active, but not garish), and low fantasy (large palm mute that sound, but without the spray). The notes stand out much, and it is easy chords of more than 3 notes, even with good saturation, without getting a horrible mush (well, have a good scratch rule of course).
In addition, it is very cheap: $ 50! Excellent price quality ratio ..
Only default: .... 2 months wait between ordering and receiving ... But it's worth it!

Scabiei's review (This content has been automatically translated from French)

Bill Lawrence USA L-500-L
5
I agree with the previous opinion, it is comprehensive and sets out all its qualities. Mine is also the model Bill & Becky. "

I would add just to support the excellent balance of this microphone, it is disconcerting to chain fluidity of power chords in tremolo (black metal power ^ ^) on Hard 80's riffs and rhythmic arpeggios to specific gender "Extreme" (the group). Everything magically goes well, without touching your amp the 2 styles of riffs sound and the whole is remarkably clean.