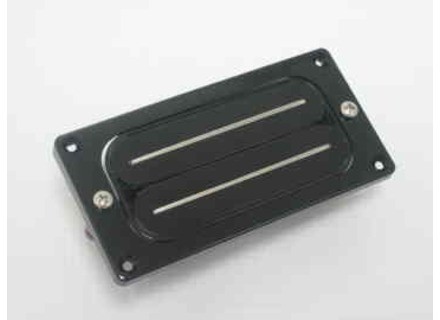 Bill Lawrence USA L-500-XL BILL & Beckie
5
I first got one of these in my 2006 Dean CFH ML. I absolutely loved it. Made my pinch harmonics effortless and just made playing more fun. VERY articulate, some complain it's too bright but in the right guitar it just sings. I put them in all mahogany guitars so that definitely smooths out the high end a bit. I play metal which is really where this shines. It has bright spanky cleans but the high gain this just opens right up. Smooth, articulate, organic, dynamic, what else can I say? This thing is just amazing. Roll back the volume and it really cleans up. It just makes playing so much more effortless, and you don't need to crank your amp to get that feel. I play with much lower gain than most metal heads and with this pickup it gives me amazing definition and stays smooth, while still giving me the gain to play modern metal. As Dime said (paraphrase), it's really thick and chunky on the lows strings but screams on the high strings like a wah pedal toe down. He described it very well.

I only found out about a year ago that the one in my CFH was a Bill n Becky. The pickup didn't have any markings so I called them and they confirmed it was theirs. Since then I've bought about 4 more along with a L500L and a L500R. I've never played a BLUSA so I can't comment on theirs. I do know that both pickups are very very similar so the whole debate online over which is better is complete rubbish. I only stick with B&B cause it was what's in my CFH. Just loved it so no reason to change it out. I have nothing against BLUSA at all, just haven't bought one.... yet.
Did you find this review helpful?yesno
»

Bill Lawrence USA L-500-XL BILL & Beckie
4
Ok let's get this over with! The war between the 2 BL pickups!! I've owned both and though I no longer own them, I can honestly say that I had a better experience with the bill and becky lawrence pickups. I bought a set a couple of years ago and put them in a les paul standard and had the greatest sounds for years!!

This is the better 500XL for sure for many reasons: one it is NOT as bright and shrill as the USA, second it cleans up better when you roll the volume down. In which the blUSA one did not.

It's main characteristic is still bright however, and sharp. Just not AS sharp. So putting this in something like a mahogany bodied guitar was a perfect balance! My LP standard sounded great every night!

Though the cleans are still not as great as other pickups it's still very usable if you're plugged into a clean amp like a fender. The distortion is where it's at. It's clear and you can hear every note in a chord ring through, harmonics jump out at you! A great pickup for rock or heavier music.

Though there's one thing I wanna say here, people keep talking about turning the pickup around to change the sound and make it warmer. THIS IS NOT TRUE FOLKS, it's ALL A MYTH. First of all, the 2 magnetic strips are MIRRORED POLES, they've been designed to be IDENTICAL. Second, I've A/Bed it with a small crowd listening and there was literally NOBODY that said they heard a difference!! Don't be fooled by such myths! Sometimes we guitar players fool ourselves into thinking such crazy things. We gotta stick together and keep it REAL! really!!

Bretteus's review (This content has been automatically translated from French)" Combination of hell!"

Bill Lawrence USA L-500-XL BILL & Beckie
5
I changed the pickups in my BC Rich Speedloader Ironbird (who had microphones BC Rich) for a combination of L-500: the R stick and XL easel. The purchase including postage was very low (102 € I scored). Customizable on the website of Bill and Beckie free.
Question her, it's a killing. Used including Dimebag Darrell, or Nuno Bettencourt, the XL is perfect for metal: Very powerful and slamming, treble in heat!
For my part, I replaced the tone with a Q-Filter, also sold by Bill and Beckie Lawrence. On the XL, it lets you go virtual and gradually humbucker, single, greatly increasing the versatility. Example: open, it is perfect for metal closed, it's perfect for reggae.
The R is also very powerful and adapted to handle, I recommend it because it is so good and useful for the XL and with these two microphones with each Q-filter, you can play all you want!