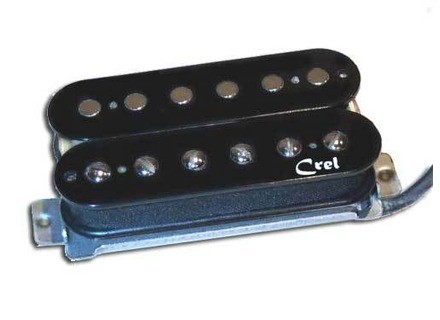 Anonymous 's review (This content has been automatically translated from French)" Heavy but ..."

Crel Falcon
5
Humbucking neck and bridge, buy gold and open version installed on my Epiphone Les Paul Custom. The knobs volumes have also been changed to Push Pull and as the wiring.

These pickups have transformed the sound and volume output of my guitar, literally.
The sound is more accurate, more powerful (except split) and "splitabilité" microphones has allowed me to find the pair of microphones that attracted me most to handle single and double saddle.

I can not make comparisons with microphones origins and obviously seen the price of Falcons, fortunately the result is better, but the pleasure felt, is now playing with this guitar, a level quite different. The very successful plastic adds a significant gain.

In CreI, they still made me kick the "Your mics will be ready tomorrow where we deliver?" just with a quote. I thought to take two months later, but it made me choose faster as I thought. Then after my actual acceptance of the quote and my payment finally they were not ready right now ... it does not change the fact that I would have bought anyway, but the process is not very honest.

I have thanked this marketing lesson (because I'd have me) and it makes no difference to the quality of these microphones is hands Pau, but I do not renew the experience already to test other microphones and check the value for money of them but also because I had the impression to me that is rude and wrong somehow But the forced sale (even finer and more crafty than some must do) I can not stand it.

it does not come into account in my note (because we do not judge CreI but falcons), I think it had to be said nonetheless.

lepaf51's review (This content has been automatically translated from French)

Crel Falcon
5
J'utile a falcon on a bridge in a position to replace the Les Paul studio microphone origne who passed away after years of loyal service that I lost count.

And although the result far exceeded my modest expectations .. in fact I had not afford to invest in an EMG which was my first idea, and my decision was linked to an article in which a luthier said use of microphones Crel.

My reaction after assembly was to wonder: what is this madman to sustain?
A detail, not least, the grain within the spirit and Gibson that I knew I would not have to EMG .. I did not know either that I should find him in Crel. So nice surprise.

Finally, this is a huge plus is that I spend more curiously hours to set my amp. Even better now I use exclusively for my guitar potentiometers as the above-named Falcon does not flatten like a buoy as soon as you touch the knob. So in rhythm I do not put in the bottom I did not lose power just the volume .. and solo and I will put forward the cavalry!

Good and I said that serious level of the guys on the internet Crel provide because they can be called without breaking the bank for information and details before buying, but especially after the purchase, and that's really significant. Hats off to all gentlemen in Crel.

See all 6 photos of Crel Falcon »