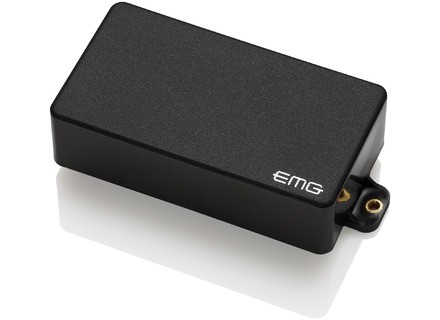 81, Humbucker guitar pickup from EMG in the Active series.

EMG 81
5
I tried to avoid active pickups for the longest time, just didn't want to have to deal with batteries and all the negative views on them. Eventually I just bought one and was pleasantly surprised. They do have a different sound from passive pickups but it's in no way a negative difference. They are very tight sounding, low noise, and have a great crunch to them. They are pretty bright so that's all personal taste, but I like it. Hard to describe the stale sound but it's like they're so tight and clean sounding it's almost unnatural, but in a good way. There's no fizziness or any annoying spiked frequencies to these, just overall a great pickup. On cleans they really excel IMO. I like a very bright, sparkly, chimey clean tone and these just nail it. Perfect example is the clean tone off MetallicA's And Justice For All album. They used EMG 81's in the neck into a Roland JC120 for that album and the EMG 81 is a huge part of that tone. Later they switched to using the EMG 60 in the neck but that album is all 81.
Anyways there’s a 18 volt mod that some people are doing, it increases the headroom. The new X series are designed to be like the 18 volt mod but more dramatic, and only run on a single 9 volt. I tried the mod and wasn’t really impressed. I didn’t notice much of a difference at all. It was slight, the overall tone was quieter and thinner, but nothing you’d ever notice in a band setting or multitracking. I’d prefer to stick with 9 volts to save batteries.
I own 3 along with some of the X series and various other EMG pickups, this one is by far my favorite. Check out my 81x review for a little more in depth comparison.

EMG 81
5
I tried my first 81 model probably a decade ago in an ESP guitar. At the time it blew my mind. It was super aggressive and super hot. It always cut through and seems to slice through every amp I used with it. It had killer bass response too. Sure the cleans don't sound too hot with it but isn't that what the EMG 60 is for? I really think this pickup only lends itself to heavy metal type players. It's way too overdriven for light rock or anything like that. It's hard to get a sound out of it that's not blistering distortion.

These are active pickups of course and so your EQ will be a bit more responsive. One problem I always had with my 81 was a lack of dynamic response. Rolling down on the volume knob never seems to do too much to clean it up (god forbid when you want a little less DISTORTION) from it. A friend of mine suggested a mod he heard about where you wire another battery in the loop to make it an effective 18 volt pickup. I figured heck why not and gave it a go. The result is a very responsive and dynamic pickup with tons of headroom. It almost turns it into a passive pickup in some ways. It makes the 81 sound more organic and less machinelike if that makes any sense at all.

I don't really recommend this to anyone but hard rock and heavy metal type players. I have tried it for other genres and it's just not fit for it, even with mods. Still, for my prog metal playing it can't be beat. I love it. The clarity is just so much better than passive pickups. notes really pop. It's really a love or hate kind of pickup.
Did you find this review helpful?yesno
»

EMG 81
4
The EMG 81 is a classic design in the guitar world. It has stayed consistant throughout its history. For a lot of people the active tone is what they wanted but they didnt like the sterile mechanical look of the black plastic covers they all came in. They wanted the tone but without completely changing the look of their guitar. For the longest time if you wanted a different look from your EMG pickups you had to do it yourself. You had to grind down the plastic covers and place the metal cover over it. This was a messy job and could damage your pickups. Now you can get Chrome and Gold covered pickups from the factory and lots of people are taking advantage of it to put in their Les Pauls and other guitars. They are not exactly like if you did it yourself. The pickups do not have pole pieces on them so you can kinda tell they are not normal humbuckers. If you did it yourself you could glue on some pole pieces to complete the look. The tone of these pickups hasnt changed but lots of people listen with their eyes instead of their ears. The 81 tone is classic metal tone. It has a razor sharp high end sound to it that keeps the clarity now matter how fast you are riffing or how much gain you have piled on. Since it has more of a high end voicing the clean tones are not that great. Personally I do not like the lead tones from the 81 either. To me they come out way too harsh when playing leads with a bridge position 81. If you are looking for high gain metal tone but want to keep the classic look of your guitar these Chrome covered EMG pickups are what you need.
Did you find this review helpful?yesno
»

EMG 81
4
The thing I like most about EMG pickups in general is the absurd amount of clarity. The note separation is awesome and there is absolutely no mud. Its also dead quite due to the active preamp.

What I like least about the EMG81 is the low end response. Its very very punchy, which is good, but its also tight to the point of stifled in my opinion. I have a very tight rig to start with, so that combined with the tightness of the EMGs pretty much takes away the low end from my rig. That said, the EMG 81 would work really well with a looser rig.

Also, the EMG 81 is really bright, which adds to the clarity, but also needs to be compensated for with eqing on the amp or it can be too bright.

A lot of people give say the EMG81 is a one trick pony, I don't agree with that. It definitely has more output than most passive pickups, but if you expect that and setup the gain on your amp with respect to it you can get great crunch and clean tones out of this pickup.

I think the real trick to getting excellent tones out of EMGs is knowing that you'll have to eq your amp differently than you would for passives. Personally, I don't like them, but that doesn't mean they're bad. I've heard a lot of guys get amazing tone out of them.
Did you find this review helpful?yesno
»
Read the 57 user reviews on the EMG 81 »