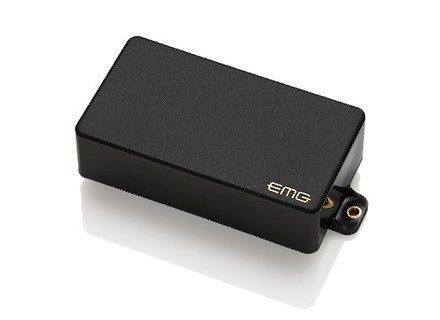 85, Humbucker guitar pickup from EMG in the Active series.

EMG 85
5
EMG pickups are active pickups. An active pickup is a pickup that requires and outside power source to operate. These pickups operate by using a preamp that is battery powered. With the battery powered preamp the magnets in the pickups do not have to be super powerful. With the lower power pickups the guitar picks up less outside noise. Also with the lower output magnets the pickups pick up less radio frequencies which is good when you play outside at a gig. The EMG 85 came out around the same time at the 81 and while the 81 was a searing metal machine the 85 was really the more versatile one of the two. The most common setup for EMG pickups is an 81 in the bridge and an 85 in the neck but if you are adventurous you can try an 85 in the bridge. The EMG 85 is the low end metal tone answer to EMG 81s searing high end gain. If the EMG 81s tone was a pointy square the 85 would be a round circle. The EMG 85 offers a more smoother or rounded tone than the EMG 81. The EMG 85 can be used in the neck and bridge position with good results. In the neck positions you can get super smooth lead tones or even bluesy tones. In the bridge positions it can make any decent guitar sound gigantic. Its tone is more focused towards the lower end so you may not want to downtune much with it for fear of getting too much of a muddy sound. Overall I think the EMG 85 is a better overall pickup. It being less sharp than the 81 makes it more useful for more kinds of music. The 81 is better only in the realm of high gain metal. If you are looking for an active pickup that can do more than just metal the 85 may be the way to go.

EMG 85
4
This is the EMG 85! I'd say it's the better of the emg bridge pickups from the original line compared to the 81.

Cleans are thick and rich, with plenty of headroom unlike the 81. good for rhythms

The distortion is where it's at! Unlike the 81 it's got smoother highs, but is still aggressively tight, even though it seems to have more lower mids and bass than the 81 would. It sounds relatively well rounded overall and doesn't seem to matter how much gain you throw at it, it's still tight, even with downtuned guitars. If I had to choose between only active EMG pickups, the 85 would be the one for me for the bridge position.

The only thing it seems to be lacking is a bit of dynamics, it doesn't clean up with the volume, if at all. This seems apparent in all active pickups. Still, though this would be one of the versatile active pickups out there. It sounds good even in the neck! In the neck the cleans are also really good and there's plenty of headroom. on top of that there's a bit of a bounce with the clean. The dirty is also quite smooth but also sort of woody sounding overall, which I like!

I've had the 85 in a lot of guitars and found them to work quite well with nearly every type of guitar as the tone is pretty balanced. Although nowadays I've grown tired of active pickups now and lazier by the day so I've begun going back to passive pickups and I fancy cleaning up the volume on a pickup which, to this day, i have not found in active pickups. They have now begun the X series which I believe is supposed to be act more like a passive pickup but have the hi-fi quality and noiseless feature of an active pickup. I've yet to try them.

EMG 85
5
For years, EMG has been an instantly recognized name in heavier genres of music for their high output active pickups. And who doesn’t recognize the ‘blacked out’ look of their matte black covered pickups? Used by top acts such as Metallica, Slayer, Zakk Wylde, and MANY more modern bands, EMG has defined a sound of its own that some love, and others don’t.

The 85 an alnico magnet humbucker usually found as the neck pickup in EMG’s recommended sets. As with all EMG pickups, it features a quick connect interfacing of circuitry and pickup, so that pickups can be swapped easily. In an active design, pickups usually have weak magnets, and couple with a preamp (the ‘active’ part of the circuit) to boost and mold the signal. This is why EMG pickups are usually found set very close to the strings. The preamp is also why EMG’s tend to sound a bit more similar in different guitars than your average pickup.

The 85 is a very hot pickup, even more so, in my opinion, than the 81. In the neck, used under high gain application, it offers a very warm and almost ‘slurred’ sound, lending itself to more fluid legato when used in a shredding application. Cleans, if not EQed specifically for this pickup, can come off overly bass heavy and undefined. The hot response does pair well with finger picking though.

Though not the ‘conventional’ EMG setup, the 85 works great in the bridge position aswell. This is my personal preference, unless I am downtuning WAY low and need to keep an obscene amount of clarity. It offers a little more warmth, and a generally more organic response than the typical 81. Chords and single note runs sound bigger, though they do lose some of the very tight initial attack of the 81. Killswitch Engage is one band well known to use EMG 85’s in the bridge positions of their guitars. Again, the quick connect cable makes trying all these EMG combinations a breeze, so break out a screwdriver, and see what works best for you.

EMG 85
4
The EMG 85 is one of the pickups that, along with the EMG 81, helped make EMG a name for itself. It’s a pickup with an active preamp inside it. That means it requires a power source. In this case, it’s a 9V battery. It’s housed in a special cover with no pole pieces and has a ceramic magnet.

The EMG 85 is a pickup that’s getting a bit dated today, but it is still a great pickup. Overall, the pickup really pushes the amplifier, despite the pickup itself actually being low output. This is mainly thanks to the built in active preamp. It’s a quiet pickup that doesn’t need a buffer for long cable runs, and it doesn’t interfere with nasty RF waves like most regular pickups do. This is what helps make EMGs more appealing, especially in a live situation.

The pickup is much fatter than the EMG 81, and I find it doesn't sound quite as "in your face" as the EMG 81 does. This can be good or bad, depending on what you're going for. In standard, I find it sounds great in the bridge, but once you start downtuning, I usually prefer the 81. Some people swear by the EMG 85 in the bridge, so it all depends on your preferences. Personally, I love this pickup in the neck. It delivers a really fat and warm tone that is just killer for leads and not too terrible for cleans.

The biggest issue with EMGs is that they can sound a bit “linear.” They’re very compressed, and this can lead to some guitars sounding more similar than if they’d have passive pickups. Some argue this case, but it’s true to an extent. The guitars won’t sound identical, but they’ll sound a bit more similar than if they might have a pickup that’s more picky about woods such as the Seymour Duncan JB.

Overall, the pickup is great, especially for those who play metal. It can be a bit dated sounding thanks to the boutique market and other active pickup manufacturers out there, but I still feel this is one of the best active pickups on the market.

Did you find this review helpful?yesno
»
Read the 33 user reviews on the EMG 85 »