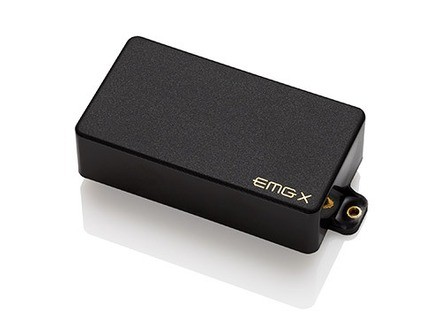 85X, Humbucker guitar pickup from EMG in the X series.

EMG 85X
5
Recently EMG started making pickups with the new X series preamp. This preamp was made to simulate the sound you get when you use an EMG pickup with the 18v mod. The 18v mod is something a lot of guitars have been doing to get a more natural sound out of their EMG pickups. The EMG 85 came out around the same time at the 81 and while the 81 was a searing metal machine the 85 was really the more versatile one of the two. The most common setup for EMG pickups is an 81 in the bridge and an 85 in the neck but if you are adventurous you can try an 85 in the bridge. The EMG 85 is the low end metal tone answer to EMG 81s searing high end gain. If the EMG 81s tone was a pointy square the 85 would be a round circle. The EMG 85 offers a more smoother or rounded tone than the EMG 81. With the X preamp this tone is even rounder and more organic. The EMG 85 can be used in the neck and bridge position with good results. In the neck positions you can get super smooth lead tones or even bluesy tones. In the bridge positions it can make any decent guitar sound gigantic. Overall I think the EMG 85 is a better overall pickup and the 85X is even better. It being less sharp than the 81 and more organic than the 85 makes it more useful for more kinds of music. The 81 is better only in the realm of high gain metal. If you are looking for an active pickup that can do more than just metal the 85X may be the way to go.
Did you find this review helpful?yesno
»

EMG 85X
4
The EMG 85X is part of the new X series that EMG developed to help rejuvenate their active pickup line. It shares the same physical attributes as the original 85, but they revised the preamp inside of the pickup.

Recently, people on forums have been experimenting with running pickups at 18V to get more headroom out of their pickups. This helps them sound more organic and less linear and compressed. The newly revised X series preamp basically takes the concept of running at 18 volts to a new level.

The EMG 85X is very similar to the original EMG 85. It has an Alnico magnet inside of it which helps make it sound rounder and less aggressive than the 81. It’s fat and really thick sounding, so it makes an awesome neck pickup for those round, buttery lead tones. The X series preamp helps make this pickup sound more open and less compressed than the original 85 was. You lose some of the aggression that the original 85 had, but you gain this sweetness with huge chords and single notes. Basically, the preamp isn’t clipping as much as it used to.

The EMG 85X works in any wood you throw at it, but I find that EMGs typically sound best when they’re in mahogany. Some people argue about EMGs having a signature tone that takes over the guitar, and this is true to an extent, but wood still plays a very important factor. I’m not a huge fan of EMGs in basswood, but they can work with the correct EQ.

If you ever wished your EMG 85 sounded more open and more like a passive pickup, check out the EMG 85X. I love this pickup in the neck position, but it also works great in the bridge for neutral to brighter sounding woods like alder, walnut and maple.