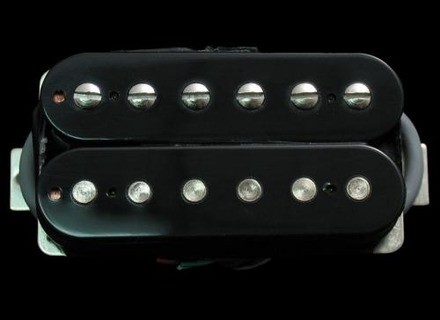 Gibson 490R
4
I purchased a Yamaha Pacifica 120SD that is essentially a Telecaster style guitar with an alder body, maple neck with rosewood fretboard, and hardtail construction that was loaded with a set of Gibson 490R/498T humbuckers by a previous owner. They were my first good quality pickups that I'd owned so it was a revelation coming from cheaper OEM humbuckers.

I would say they're a medium output pickup set, which on paper looks to be a very versatile pairing for many different styles of music. I've always thought that they were a decent pair for sure.

The neck pickup (490R) is a very nice sounding neck humbucker with a nice lush sounding low end and a decent sparkle in the top end as well. It sounded best for jazz type sounds I found (using a clean tube amp) but I also enjoyed them for a slightly Hendrix esque sound with a mild fuzz and a cranked tube amp. Obviously they don't sound like true single coils or anything but I found that the neck pickup had a nice shimmer that took the tones one step closer to that sound.

The bridge pickup is a nice reasonable output pickup that does everything from Clapton to Van Halen fairly well and I dig that versatility. It doesn't quite have that top end that the neck pickup has, but it does have a nice punchy low end and some good strong midrange frequencies that sit very well in a band mix. Cleans have a very full bodied tone overall and the drive tones are really spongy and cool sounding, kind of like playing through a browned out amp. I do prefer the 57 Classic set over these, but for a slightly higher output set of pickups, I was fairly impressed with these. If given the choice over again, I would opt for the 57 Classics, as I feel they're the best pickups that Gibson makes, but considering I bought the guitar used with the pickups pre-installed, I guess there wasn't much choice in the matter!

All in all I felt that these were decent sounding pickups that worked well for a wide variety of styles. Definitely worth a look!

Gibson 490R
5
I bought it on advice of my luthier at first because I wanted to micro caps golden masterpiece on my Cort MMP-3 which was equipped at the base of Seymour Duncan SH-1 and SH-4 (Jeff Beck). So I went on the same microphone with a golden cover ... But I followed the advice of my luthier and I bought the pair 490R and 490T - Gold cover. And well how I felt. I really prefer the sound of these mics to those seymour duncan. The sound rendering, it is clear or saturated, is beautiful and I like much more than that made by Seymour Duncan. The difference is anything but sensible!
In addition to these microphones and split-are, so if you have a grat 'planned for, like mine

, you can use these pickups in single or double. In simple, clear sounds on, the sound is magnificent.
FYI, I played on Peavey Classic 30 and now on a combo Hughes and Kettner Tubemeister TM-18.
They were in the promo, the value for money is excellent!

I am installing this on a pair of Gibson Epiphone Les Paul Standard 7 months ago.

Before this pair of gibson, I previously had the opportunity to test the conventional EMG (81, 85, 80, 60) that I was not convinced at all (its too cold, trod right, too clean) and other microphones without renown. I always had a soft spot for THE sound gibson. With this pair, my wish has been realized.

Let's start with the positives (which are subjective of course).
I like the sound first sharp, incisive of 498T, and, for the 490R, the warm, round, though muffled, but that is an indisputable clarity. These are really typed vintage microphones with their own personality. Personally, I can not imagine the 490R with a microphone other than the 498T (that is to say their complementarity).
What I like least is probably slightly muffled sound of the 490R, but now I quibble, it's really to find fault.

I paid € 150 per pair in the largest German retailer in the world. I do not particularly unreasonable prices while prices of Gibson guitars, which they really are. My Epiphone was transformed with these two mics, and I do not see why I debourserais € 2000 for a Gibson. So the value for price is right I think.

Now that I have this lovely pair (we're talking microphones gentlemen, nothing else), I am more than happy. However, I'd go throw an ear on the side of Burstbucker or P57 ... history of a pleasant change, but I never venderais the 490 and 498, they tear really.


Note that I plays in a fairly wide going from blues to black metal, demonstrating the versatility of the pickups. Then you have the amp behind and everything else ...

Sushi's review (This content has been automatically translated from French)

Gibson 490R
4
Microphones used since November 2004.
Very good microphone for his full, the big crunch to distortion. Wide range of sounds if you play with the knobs for volume and tone. The 490R (alnico II) also sounds very well in his plans clear to jazz-funk. The 498T (alnico V) is less attractive against a clean sound (though it depends on personal taste ...).
Overall, they are good mics with a good quality / price ratio.

Did you find this review helpful?yesno
»
Read the 8 user reviews on the Gibson 490R »