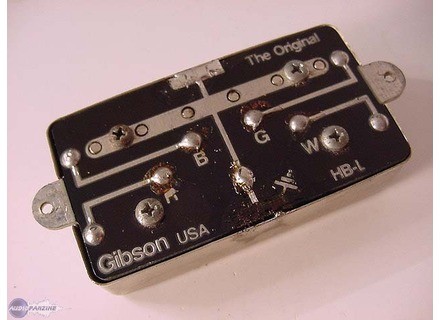 Gibson HB-L
5
Originally fitted to my Les Paul Custom Orville By Gibson (other feature Classic 57) HB and HB-L-R undoubtedly regain Gibson grain, but with one side less "muddy" than a lot of microphones of the brand. A significant feature is the ability to split these microphones, originally equipped with the 4 + son mass, which is not always the case with Gibson (link the two coils is in the microwave).
More versatile than the classic 57 more medium because it is also a bit (a bit ...) less interesting blues / jazz.
Otherwise, it's very very good ... A test anyway, the grain is typed vintage.
Did you find this review helpful?yesno
»

strapontin's review (This content has been automatically translated from French)

Gibson HB-L
5
I can not say better than the previous opinion. These are HBs micro absolutely sensational. The classic mistake is consisite find them on the old Les Paul and sell them and replace them with the Classic 57 or Burstbucker, which are worse.
Warm, very powerful and dynamic, a split that although most satisfactory current gibson. Is unfortunate that Bill Lawrence Gibson left home, he would have deserved a statue alongside Mr Seth Lover.
Did you find this review helpful?yesno
»

bongo666's review (This content has been automatically translated from French)

Gibson HB-L
5
Micro unknown, a collaboration between Lawrence and Bill Gibson.
How to describe it? ... EXCEPTIONAL! Really, it is well above the current Gibson (and old).
There's grain Gibson, there's Bill of potato and its 500XL. It is balanced, full bass, full treble, full of mediums.
In short, the perfect blend of a Classic 57, his warmth and roundness of a 500XL Bill Lawrance, its output level huge, potato, accuracy and dynamics of the two microphones together ..
It is as if what was changed under the hood at the same time we change the channel on his amp.
On the clear is a classic 57, the crunch is a Classic 57 over on the big rock is a 500L and the nag is a Tone Zone ...
AND ... in addition, it is splittable.

Only drawback, it seems micro found.

Gibson HB-L
5
Install from a fortnight on my LP Classic Premium Plus with her boyfriend on HB R. I play on Bogner Fish and VHT 2x12 2 February 50 NOS, for info.
I have tried many pickups Duncan, Di Marzio, EMG, PRS, Carvin (very good microphones underestimated by the way), Bare knuckle. (I think I've forgotten anyone) Yes, I like to try the mics ... I realized over time that in these product lines, there is no bad microphones. Some sound better (objectively) on a guitar plutt another - even gear testing, and ditto rglages group, the rest as a case (subjectively) got in, the game (c is certainly more flattering but not play better microphone ... ?!!??) Heiniger and de Matos derrire.
CRITERIA factor is my pleasure to try both and, of sr, play, and the opinions of my friends in BPS: "we hear you with the best lquot; , "it's hotter" etc. ..

The HB is the microphone that I finally let on that LP, APRS multiple tests for a few years ... until the next? Can be ...

Output Level pchu well (measured 14k) trsmdium, nice bass and treble and pais Submitted without being garish as I like. This mic sounds big rock sound. The grain is not tight it is open and "breathing". Big sound, it sounds, my ears, like a 500T with a big dynamic and ar. Just under same level when, but makes it sing.
And it is precisely this dynamic that makes the great crunch with mdiums solid without being deaf and a little dirty cot Gibson: Guns of the acdc and the fact. C also the fact of Metallica, but with his personality. It's not a 81.

Super Micro, for me one of the best I've tried in the old school style, big sound. You can go in the clear with the volume knob, and in crunch gnial follows saturates, but is not modern and tightened as is now done. It is equilibrated pais, passes into the mix and hot trs. It follows the lead attack that more care, the coup. J'adooooooooore.

The weak point, rarely sold so cheap. But it's not his fault ... So I yelled to no.

He apparently silent on the Mount Gibson in the 90's, made by Gibson and Bill Lawrence. I possde two HB R, one is 9k and the other 7.5 k Resistors. Big diffrence in sound between the two. Go figure ...

Did you find this review helpful?yesno
»
Read the 5 user reviews on the Gibson HB-L »