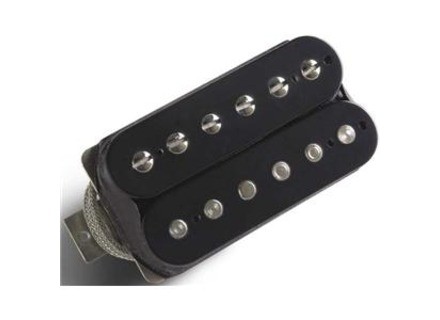 Gibson Burstbucker 3
4
The Burstbucker is one of Gibsons more recent pickups. Like just about all of their pickups it is a PAF copy. I guess it is more of a PAF copy than the other pickups they have made in the past 30 years. It was first sold in Japan to old Gibson collectors. There are 3 versions of the pickup to represent how bad the build quality and inconsistant the old Gibson factory was. The Burstbucker 1 is underwound and has a low output. The Burstbucker 2 is a lot like a Classic 57 and has a medium wind. I guess the 2nd one is the most accurate of the 3. And the Burstbucker 3 which I am reviewing is the hottest of the 3 and is pretty much a bridge only pickup. The pickup has Alnico2 magnets for a more vintage style tone. With gain the pickup has that thinner vintage pickup sound. It is not super full sounding under gain like a modern high end pickup. These pickups like just about all Gibson pickups have a more classic rock voicing to it. With medium gain it has good spank to it. You can get a real stinging blues tone from the pickup. The clean tones are of the more twangy kind. Since this is a bridge pickup you get more of a trebely sound from it when playing cleans. If you like twangy cleans you will like this pickup. If you are into smoother cleans you would be better off using your neck pickup whatever it may be. If you are looking to make your guitar sound like a good old Les Paul you might as well use what Gibson is using. This is that pickup. To have the new Gibson sound this is your best bet in the bridge position, the Burstbucker 3.

Gibson Burstbucker 3
4
Micro Alnico II by Gibson, the microphone is open super adbite well it returns inside one is between the vintage and modern is quite surprising, acute slam is not much harm in the bottom middle, the bass by stand out against the coup slice least not bad and at the same time remains bluesy, lightweight ...
Micro install the Joe Perry, Joe Bonamassa, Jeff Beck ... in short it is a standard bridge on the Gibson catalog after I have a preference for the model probably uncovered the influence Jeff Beck Oxblood as on and at the same time the model covered remains cool as the Joe Perry Boneyard ... I install a Gibson ebony Trad 50 instead of 57 Classic for instant no regrets complmentaire it became a shovel in my set by against I keep a Les Paul Classic with 57 ...
Did you find this review helpful?yesno
»

Gibson Burstbucker 3
4
Micro Alnico II by Gibson Burstbucker 3 is the microphone which delivers the most Burstbucker in the range, the microphone is super open, it is returned in it is between vintage and modern is quite surprising, treble slam was pretty good low-middle, the bass with less prominent against the coup slice it not bad and at the same time it's still light and bluesy ...
Micro installed on the Joe Perry, Joe Bonamassa, Jeff Beck ... short it is a standard bridge on the Gibson catalog after I have a preference for the model uncovered surely influence on Jeff Beck Oxblood like and simultaneously covered model remains cool as the Boneyard Joe Perry .. . I installed it on an ebony Gibson Trad 50 instead of 57 for Classic currently no regret it became a shovel in my complementary set between vintage and modern on the other hand I keep a Les Paul Classic with 57 .. . According to those who seek pure vintage is not the right mic is there really between the two ...

See all 68 photos of Gibson Burstbucker 3 »