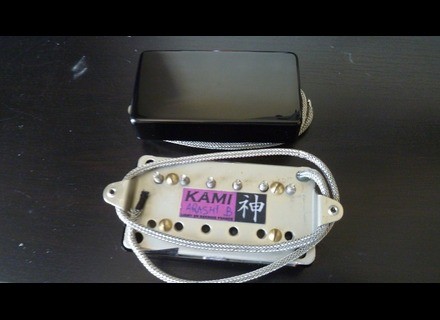 All user reviews for the Kami Micros Arashi

qnitech's review (This content has been automatically translated from French)

Kami Micros Arashi
5
PERIOD Aprsune of intensive testing, I must go the obviousness, Sylvain MULLER is a god ... or so it's god ... in any case is that of micro Franais rock!
I equipped one of my guitar (mahogany body GODIN EXIT 22 round SLAR) with HSS configuration Harash, EE90, EE90, after you tried a scoop of SD and MD, I finally found what I was looking for, whatever the position duslecteur, the combination is deadly Harash EE90!
Harash position only, Sylvain is not lying when he says that a bite but it's clean and there is beef in it, and even the big beef, whether saturated or clear it looks like the best mics GIBSON ... but better.
I already availing oneself of an EE90 (which is my favorite) in the neck position, round and warm as the embers, as if c'tait a girl he'd do things! A EE90 So I said in the neck position, so I logically, on the recommendations of Sylvain, APRS in a lengthy discussion with him in person (wouaaaa) add an inverted polarity EE90 ... how to say ... Mount each time ... how to say ... I do not know what else to change that position monslecteur as I like all the positions.
At ease in fields as varied as lemtalau funk to rock or jazz, these microphones captured me, I have only one regret, I have guitar equip for now!
If I put 10 first and foremost because perfection exists (I took some time noticing) and besides the man who manufactured it to me is the king of guy, generous with advice, available, full of humor, you want to be his buddy so he's cool! (Even when it has a default, it is not very pain in HTML (wink)
As more is manufactured in France, the best components and Sylvain utiliss tries to reconcile it all with the most dedveloppement durablepossible (for packing h! Not mikes!) he deserves a hat!
I said!

Kami Micros Arashi
5
Micro handmade and more Made in France!

I still see that say Okay, well you have more wrong, you liked the Seymour Duncan or EMG ...

but then you will love these microphones Kami because I dare say it's the ultimate, a production exceptional, high quality, certainly expected a little microphone but frankly it's worth the trouble, c 'is the slap, the sound, it is not rough, it is defined, the powerful sound while retaining accuracy, a definition out of the ordinary ... in short we are in the excellence,

Sylvain, the designer knows his job is a passion ... the race of knob volume can be used on a range rarely encountered. It's another world ... you dream ... of the other world ... nan microphones will be well over one who has tried can not go without!! so if I know!

You want to get out of the sounds of classic brands of microphones, then try one board micro Kami or you want a specific sound with your microphone it is possible I asked and frankly I was not disappointed at all, good I still see that cause and the price and it's still reasonable compared to what I know of microphones made entirely by hand, this is my second guitar I go into a microphone KAMI LTD EC-1000 just a killing after my PRS it's crazy! simply replace the kit EMG and info I mounted the Blackrose in the neck position (neck) and the model in the bridge position Arashi (Bridge) as on my PRS, and in two cases, these two bring out the guitar pickups I said they are both used alone or in rhythm as needed, clean sounds out superbly and the crunch in short, I will tell you enough ... KAMI one kill these microphones, another big THANK YOU to the magician Sylvain Kami! Notes 9 out of 10 because perfection is not of this world but these mics are well worth any hesitation 10/10!

you want to see these pickups on my guitars: myspace.com / dominiquevassart

Kami Micros Arashi
5
Micro handmade and more Made in France! I see immediately who say Bad and well you are wrong, I tried many of the Seymour Duncan SH and SSL and the same ct EMG pickups ... for these microphones Kami c ' is the ultimate, exceptional production quality is not the quantity that counts in the production ... even if we wait a little his microphone frankly it is worth the trouble, it is the slap, the sound is crmeux, no drooling, sound is powerful while retaining precision a definition unusual ... in short we are in the excellence, the designer knows his job, this is great f ... running volume knob can be used on an amplitude rarely encountered.
You want to get out of micro sounds of classic brands, while one board try Kami mics or you want a microphone with your sound spcifique possible I asked and frankly I did not t all the, well I can still see that cause and the price is reasonable and well compared to what I know microphones made entirely by hand, I plan to start campaigning find the microphones Kami that will suit my EC-1000 because the EMG kit does not suit me for info and I mount the Blackrose in the neck position (neck) and Arashi model in the bridge position (Bridge) on my PRS, j adore these two mics because they are both usable rhythmic solo or as needed, a SLAUGHTER KAMI these microphones, a big THANK Sylvain Kami magician!

There was also Judge Fredd who says what he thinks of Kami microphones this address:
https://www.judge-fredd.fr/spip.php?article604

To listen: please visit myspace.com/phaesis
Did you find this review helpful?yesno
Cookies help us improve performance, enhance user experience and deliver our services. By using our services, you agree to our use of cookies. Find out more.