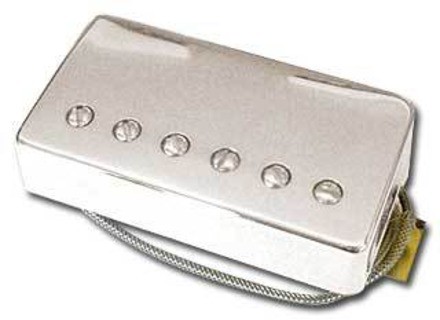 PRS Dragon II bass
5
I bought this mic with his friend, the Dragon II treble, during the winter and installed it in the spring to a tuner schecter.

It is hard to describe objectively and explicitly a microphone. But I'll try to tackle it.

Very hot at the base, the microphone is very hot mushy position to its maximum, creating a halo around the notes played as the heat is conscéquente, fifth turn enough to give it more accurately and enjoy the qualities which I m 'Fall in Love. It is very subtle, and may apply to all applications. In its less extensive, there are sounds fluffy, full of rounded attack and a very rich sound. When combined with its counterpart bridge, the sound delivered is rich and beautiful and sits on its low frequency. His contribution is particularly noticeable in clean and gives a sound very harmonious.

The sound is split and I especially include product comparison. A very personal sound. To say that a microwave does not split a light background would be a lie. It must, however, that I have to listen carefully to collect background noise (which, again, appears on all models of pickups). I also advise on the Korean guitars, making a careful tuning. A good wiring, a condo worthy of the name and good knobs will make the most of the sound delivered by this microphone.

The cover version of Chrome is very sensitive to fingerprints and sweat. Without careful maintenance, they tend to deteriorate rapidemment. The gold version is it, as sensitive, but to a lesser extent.

Note that owners should be wary Schecter generous dimensions of these pickups, mini-ripping was necessary on my guitar (less than one mm per side, but it was really going on without that).

The connection to three son, prs typical, is not disturbing for mounting on other guitars, once you get to the idea.

The purchase price is high but I find it justifiable.

One can better than his brother easel, it is also more versatile and suitable for most applications but, and this opinion is only my opinion, it would be a shame not to breed with his namesake treble. The sound is final, but the price unreasonable force in Note [9]